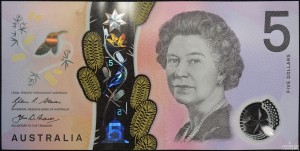 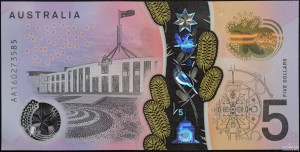 170 million next generation polymer $5 banknotes notes were introduced into circulation by the Reserve Bank of Australia from September 1st 2016. The serial numbers ranged from AA to EJ with AA the first prefix, EJ the last prefix and everything in between a general prefix serial number. Each letter run ceases at the letter K, eg AK, BK, CK. Each sheet of notes runs 6 across and 9 down making 54 notes per printed sheet. This was enough notes to replace every old $5 currently in circulation! Businesses have needed to upgrade or recalibrate counting equipment to accept the new note and for the foreseeable future both notes will co-mingle.

The release of the Next Generation $5 denomination is a result of 10 years of research in a project to upgrade the security of Australia’s banknotes. The cost of the research, development and public awareness of the upgrade (of all denominations) is set to cost taxpayers $37 million over the next 12 years. The next denomination, the $10 will roll out in late 2017 followed by the $50 and the remaining denominations after that. All of Australia’s banknotes are printed by a subsidiary of Australia’s Reserve Bank Note Printing Australia in Craigieburn Victoria. They also print banknotes for other countries, passports and identity documents.

The new generation five dollar is the first in the new series and to commemorate the new issue the Reserve Bank of Australia has produced 2 different brightly coloured purple folders for collectors.

The New Design
The new design keeps the same colour palette as the old note but adds brightness which keeps the new notes similar enough to the old to be easily recognised as an Australian five dollar note.
The large number 5’s and printing of AUSTRALIA and FIVE DOLLARS in black are printed in intaglio which gives the letters and numbers a raised feel. Prickly Moses Wattle (Acacia verticillata subsp. ovoidea) is featured on the new note, a different species of wattle to that on the old note. The Eastern Spinebill (Acanthorhynchus tenuirostris) is the native bird that adorns the new note.

An updated portrait of Queen Elizabeth II is derived from an original source photograph commissioned by the Reserve Bank in 1984 and was approved by Her Majesty. Thanks to advances in technology the new portrait more closely resembles the original source photograph. Parliament House in Canberra with it’s forecourt mosaic is again featured and on the new note the design has much more detail and depth. This mosaic artwork is a unique feature of Parliament House and is based on the painting ‘Possum and Wallaby Dreaming’ (1985) by Michael Nelson Jagamara which describes a gathering of a large group of people.

The new note features a raised ‘tactile’ area that assists the vision-impaired community. This embossed tactile feature is a single raised bump on each long edge of the banknote to assist those that are vision impaired differentiate all the banknote denominations.

Enhanced Sophisticated Security Features
The top to bottom clear window houses some of the three-dimensional security features such as the Federation Star, the Federation Pavilion and the flying bird. Interestingly, in production the banknote starts as a clear sheet of plastic so this clear window is just an ink-free section. The Reserve Banks says this is the first banknote in the world to feature this type of window. The Federation Star appears in the top to bottom clear window in three dimensions with a coloured border. It also appears behind Queen Elizabeth II set within a clear window in the bottom corner of the note. This small window is technically a Prickly Moses wattle bud. The embossed star is produced during the intaglio printing process, run your finger over it and it’s texture can be felt.

At the bottom of the large clear window is the Federation Pavilion which is located in Centennial Park in Sydney and was the site of the official ceremony marking the proclamation of the Commonwealth of Australia on January 1st 1901. Inside the Federation Pavilion on the new note is the number 5 that appears both forwards, backwards and disappears when the note is tilted. This is called the reversing 5. The flying bird is the Eastern Spinebill and can be seen in the clear window below the Federation star. Tilt the banknote and the bird appears in different poses simulating flight. 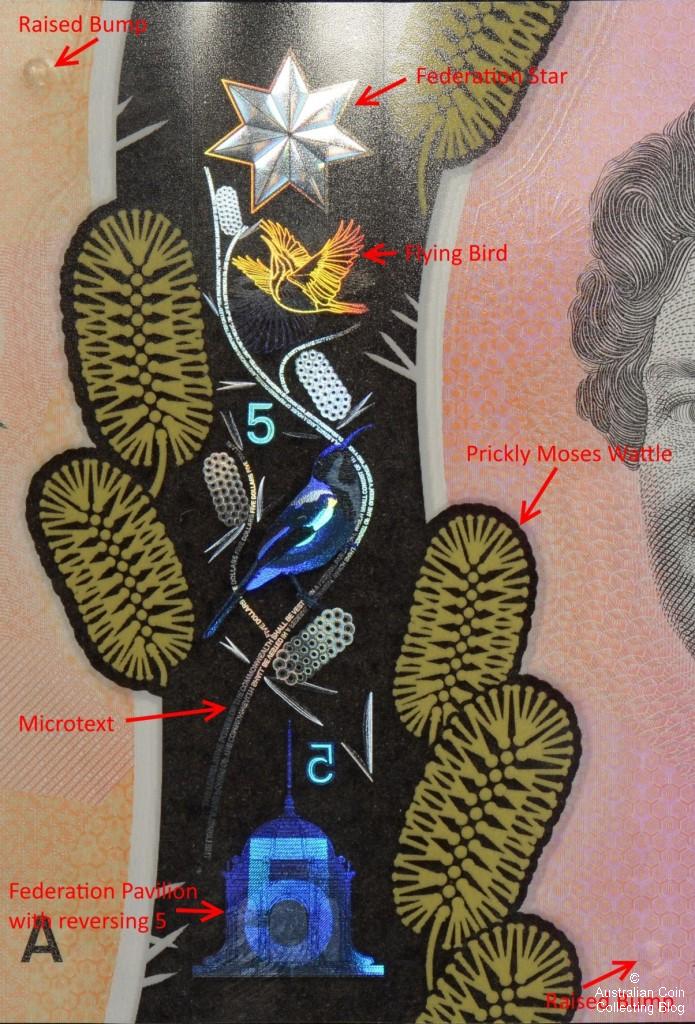 Microprint is tiny, tiny writing found in multiple locations on the new note. In the top to bottom clear window you can find excerpts of the Australian constitution. What appears to be a branch in that window is actually microtext that says:
“THE LEGISLATIVE POWER OF THE COMMONWEALTH SHALL BE VESTED IN A FEDERAL PARLIAMENT WHICH SHALL CONSIST OF THE QUEEN, A SENATE, AND A HOUSE OF REPRESENTATIVES, AND WHICH IS HEREIN AFTER CALLED “THE PARLIAMENT“, OR “THE PARLIAMENT OF THE COMMONWEALTH“. And “FIVE DOLLARS” repeated. This text also appears in front of Parliament House. To the left of Parliament House in the wall the microtext can be read more easily:
“THE SEAT OF GOVERNMENT OF THE COMMONWEALTH SHALL BE DETERMINED BY THE PARLIAMENT, AND SHALL BE WITHIN TERRITORY WHICH SHALL HAVE BEEN GRANTED TO OR ACQUIRED BY THE COMMONWEALTH AND SHALL BE VESTED IN AND BELONG TO THE COMMONWEALTH“. Microprint can also be found behind the signatures within the coloured background. Background printing on the note is extremely finely detailed and is multi-directional. This is just one of the features aimed at deterring counterfeiters. 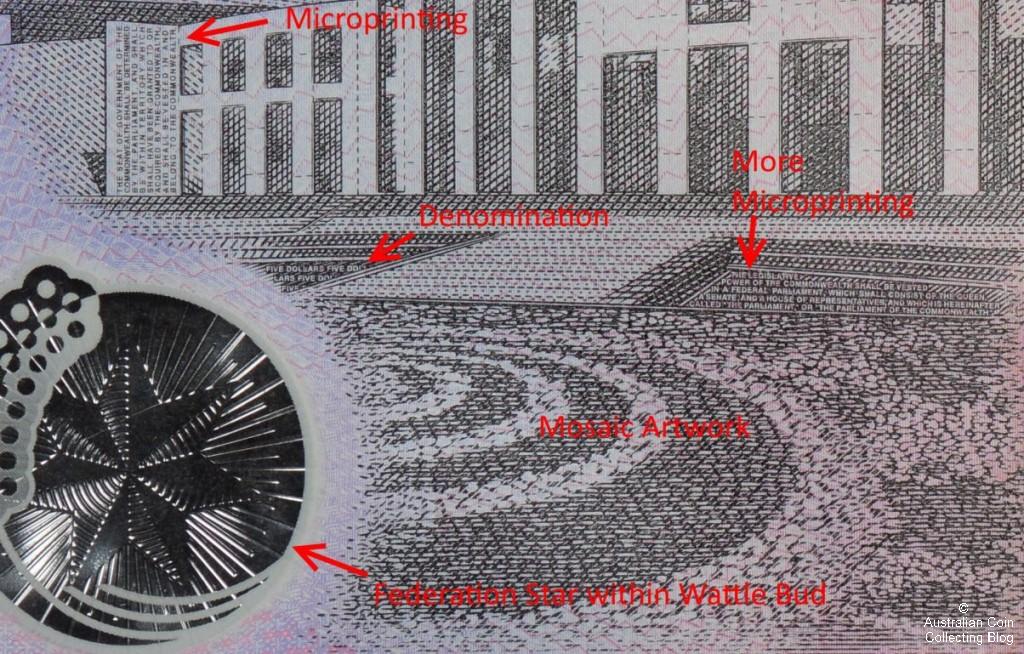 Behind the signatures on the note, a hidden bird will appear and a year of print running parallel to the flagpole on Parliament House will fluoresce under UV light, another security feature of the new banknote. The serial number will also fluoresce under this light. Below the single serial number on the note is a series of orange circles hiding the Eurion constellation. This is a pattern of symbols that can be detected by software in a printer or photocopier that will prevent the machine from copying the banknote -another feature to deter forgery and counterfeiting.

By tilting the banknote we can see what is called the rolling colour effect on the other Eastern Spinebill (bird) on the top left of the note (signature side). Hold the note up to the light and the rest of the bird’s body and legs appear in shadow. The rolling colour effect is also seen on the prominent patch directly behind the bird on the serial number side.

Signatures
The signatures featured on the 2016 New Generation 5 dollar banknote are Glenn R Stevens, Governor of the Reserve Bank of Australia, and John G Fraser, Secretary to the Treasurer. Interestingly the Governor Mr Stevens held this position for just 18 days after the first issue of this note when his 10 year term as Governor ended. This signature pair will not be issued on any future new generation banknote issues. 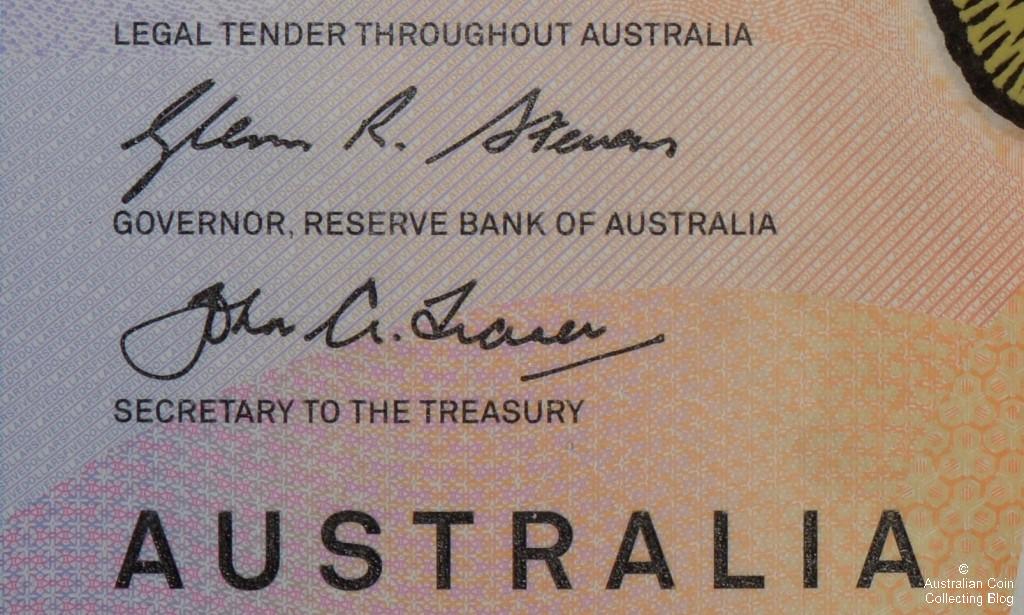