A voyage to Terra Australis B Counterstamp Dollar

Last weekend on the 24th and 25th of May saw an ANDA Coin and Banknote Show being held in the Brisbane Table Tennis Centre. For those who are interested in stamps this year the show was held in conjunction with the Australian Philatelic Traders Association and there were a few more stamp dealers in attendance than is usually seen at the average ANDA show. Unfortunately only one of the blog authors managed to attend this show, which isn’t what we like to do usually. It’s always great to have a friend along to talk to and to make sure the coin you’re about to buy isn’t a dud. Travelling alone also meant that it was a fly-in-fly-out show, with a 6:00AM flight on Saturday leaving Adelaide for Brisbane and not touching down again in Adelaide until well after 10PM the same day.

I like the Table Tennis Centre as an ANDA show venue. It has been used for the Brisbane ANDA shows for a few years now and it’s easy to get to from both the airport and the city. The front door was manned (personned?) by voluneers from various Queensland coin and stamp clubs (such as the Queensland Numismatic Society) and admission for one day was $10. Once inside dealer tables were well laid out with plenty of seating and aisle space and the lighting was excellent There was a cafeteria selling food and drinks at reasonable prices (I got a sandwich and a drink at lunch time for $7.50) and staffed by volunteers from the table tennis centre. At one end of the venue was a bank of seating, usually used to watch table tennis action but in the case of this show, well used to rest the weary legs of show visitors. My only gripe about the center is that it’s not well air-conditioned and it was a little hot and humid inside this year. That being said most capital cities in Australia are unseasonably warm right now so perhaps if the weather wasn’t so messed up it wouldn’t have been so uncomfortable inside. 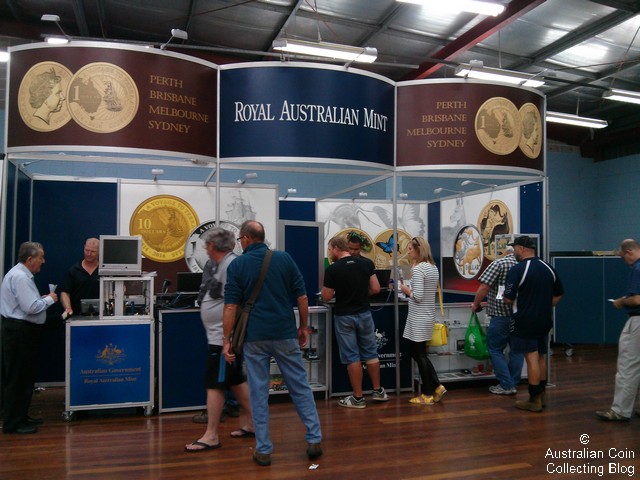 The Royal Australian Mint was in attendance this year and the RAM brought their portable press along, where for $10 you could press the button and counterstamp your own Voyage to Terra Australis dollar. According to the press operator the coin is supposed to have a mintage of 7,500 and no doubt will be distributed through the RAM dealer network. Never fear, if you didn’t attend the show it won’t be too hard for you to buy one of these coins. As well as the portable press the RAMfolk also brought along their usual array of NCLT and I am somewhat shamefaced to admit that I bought some of it. Including the new high relief 1 ounce mob of roos silver dollar and the pad-printed copper nickel mob of roos dollar. They are both pretty coins and interesting variations on the iconic circulation coin design minted for the 30th birthday of the Australian 1 dollar coin.

According to the ANDA Showguide I brought home with me there were another 41 dealers in attendance at the show and I can believe it. All tables had a dealer standing behind them and all of the tables were full of stock. If you came along to the show and didn’t find something to buy then you either were not looking hard enough, are extremely picky, or are completely broke. Apologies at first to the stamp dealers because I didn’t look at any of their tables so I cannot comment on who was or wasn’t there. Local Queensland coin dealers of note that I recall include VP Coins, Global Coins & Banknotes, Roxbury’s Auction House, Gold Coast Coins and Stamps, International Auction Galleries, Colonial Coins and Medals, David Rider Numismatics, and Claude Andresco Coins. Dealers who had made the trip from interstate included Sterling & Currency, Pacific Rim Coins, Australian Coin Auctions (Downies), Prospect Coins, Universal Coin Company, and Canberra Numisco. Particular credit must go to Andrew Crellin (of Sterling and Currency) who, having travelled the farthest of all dealers in attendance (from Western Australia) still had an amazing range of material to look at. I bought a couple of things off of him and I appreciate the effort he took to bring some specific coins for me to look at. 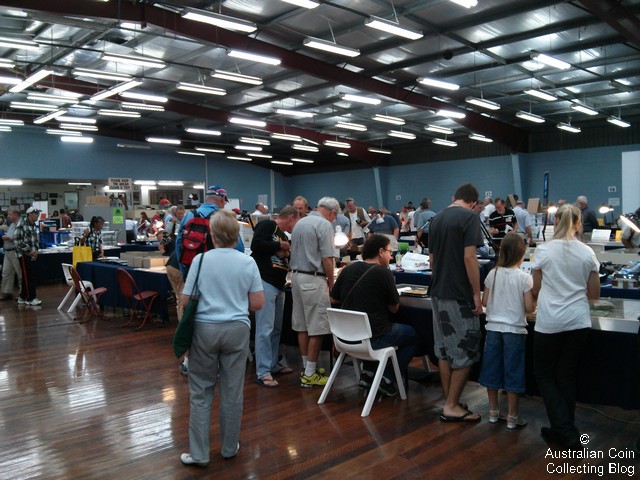 Attendance before about 1.30PM was extremely strong and for the first time in a long time at an ANDA show I had to fight for a spot to sit and look. And amazingly it seems that people didn’t just come to get their coins from the RAM, with most dealers reporting to me that their sales had been good. The types of coins being sold seemed to cover the full gamut, ranging from recent release NCLT, Australian decimal singles, modern world coins, quality Australian pre-decimal, and pricey errors and ancient coins. This doesn’t surprise me though, as I believe it’s a buyers market right now, especially for collectors of premium (and scarce) material. This idea was backed up after the show when I was talking to a very well known Australian numismatic identity. He suggested that now was the time to be snaffling up coin (and banknote) rarities with an eye to future long-term returns. For those (like me) who do not look to buy items from the top end of the market there were still bargains to be had for those on a lower budget. For example, the bottom has really dropped out of the Australian mint and proof set market and if you’re looking to complete your run of sets now is the time to do it.

Given that we are strong supporters of third party graded coins (in particular those graded by PCGS) I should comment on their representation at the show. Chris Buesnell of Pacific Rim Coins had cases full of slabbed coins as did Sterling and Currency and Universal Coin Company. IAG and Monetarium Adelaide had some rarities in PCGS and NGC slabs and I noticed a few dealers with graded bullion coins (such as Kookaburras, silver kangaroos, and American silver eagles). Graded coins seemed to be primarily the domain of the “bigger” dealers though with very few of the local Queensland dealers having any at all. One comment I have to make though is that this is the first show in a long time where the discussion I had with show attendees regarding third party graded coins was entirely positive. Perhaps the collector market is starting to see the advantage of getting their coins graded and certified by companies such as PCGS and NGC.

That’s another ANDA show report done and dusted. Thanks to everyone in Brisbane who I met and talked with. Thanks to the members of the Australian Coin Forum who I met at the show and in particular to the forum member in the Pac-Man hat that made him easy to find. And thanks of course to my fellow blog author who stayed home in Adelaide and manned (personned?) the battle stations while I was in Queensland looking at coins. Both of us will be attending the next ANDA show in Melbourne in early August so stay tuned for another riveting show report coming your way soon! 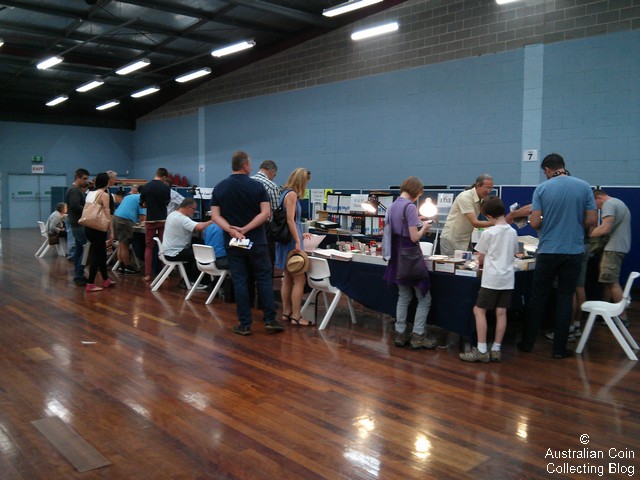