I was born in Sydney and when I was 2 years old my family moved 4 hours south to Cooma, ‘The Gateway to the Snowy Mountains’ which is where I grew up. My grandparents, aunts and uncles all lived back in Sydney so for most school holidays and Christmases we travelled there to visit. 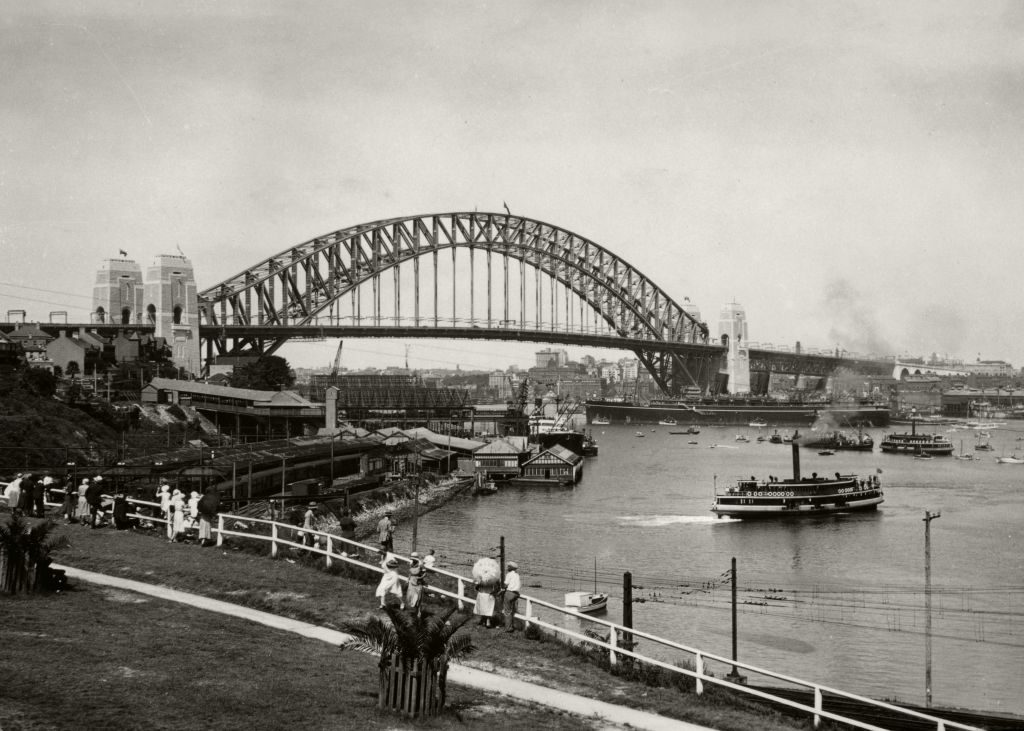 I have fond memories of this time spent holidaying in the big smoke which always included hopping on a train and making the trip in to Central Station and the city circle. We’d always pack lunch and set off with roast lamb and tomato sauce sandwiches made by Grandma Polly.

The North Shore was the other side of the Sydney Harbour Bridge and a trip across the unmistakable icon was a must-do on many trips. Perhaps by train but mostly by sneaker, Mum, Dad, my sister and me made the trek to the other side. 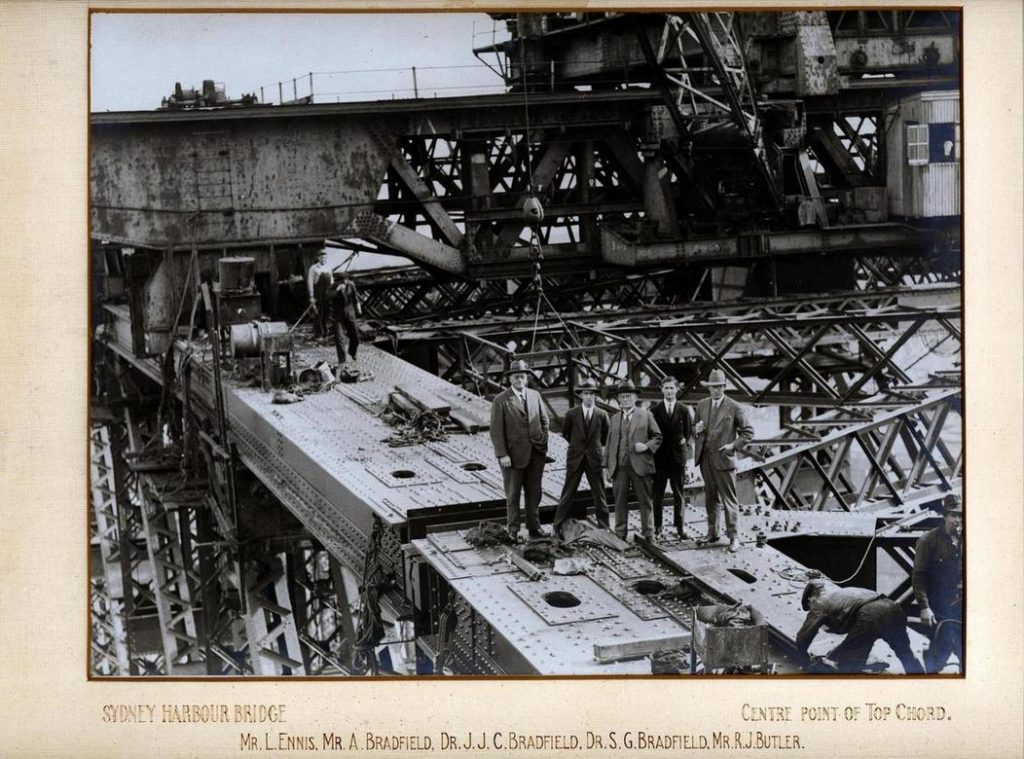 The bridge officially began construction on July 28th 1923 with the “turning of the first sod” at an official ceremony in Milson’s Point. This was 10 years after the Sydney Harbour Bridge project was first planned and over a hundred years after the first ideas were raised to build a bridge linking the Central Business District to the North Shore of Sydney. The government, through a tendering process worked through twenty proposals from six companies for the construction of the bridge awarding the contract to British firm Dorman Long and Co Ltd. 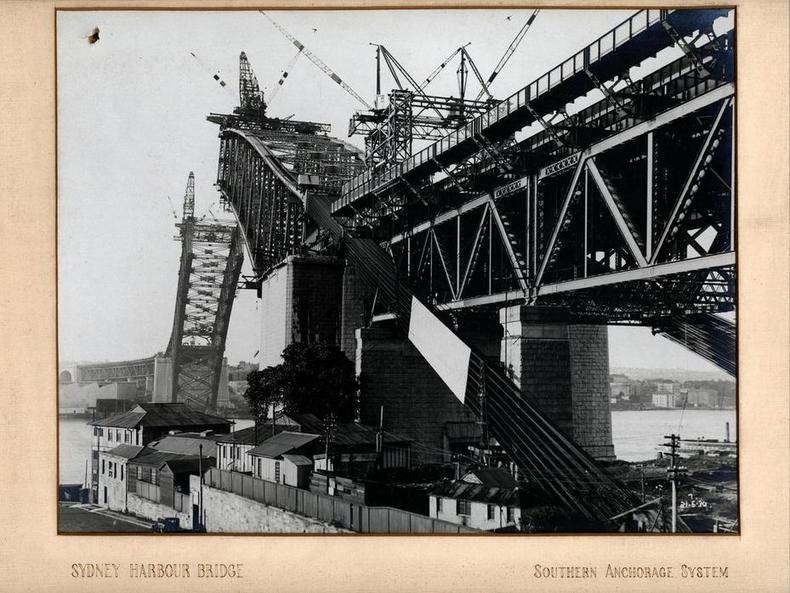 Calculations for the designs of the bridge filled 28 books and, in the end, it cost more than 10 million pounds to build the bridge (10,057,170 pounds, 7 shillings and 9 pence to be exact). This is just under a billion dollars in todays money.

The Sydney Harbour Bridge, affectionately known as “The Coathanger” because of its arch-based design extends 1,149 metres from one side to the other. The arch spans 503 metres with four pylons standing 89 metres above sea level. Interestingly these four pylons serve no structural purpose and are a decorative feature only. It took 95,000 cubic metres of concrete and 17,000 cubic metres of granite stone to make the bridge. Steelwork weighing 52,800 tonnes is held together by around about 6 million rivets. 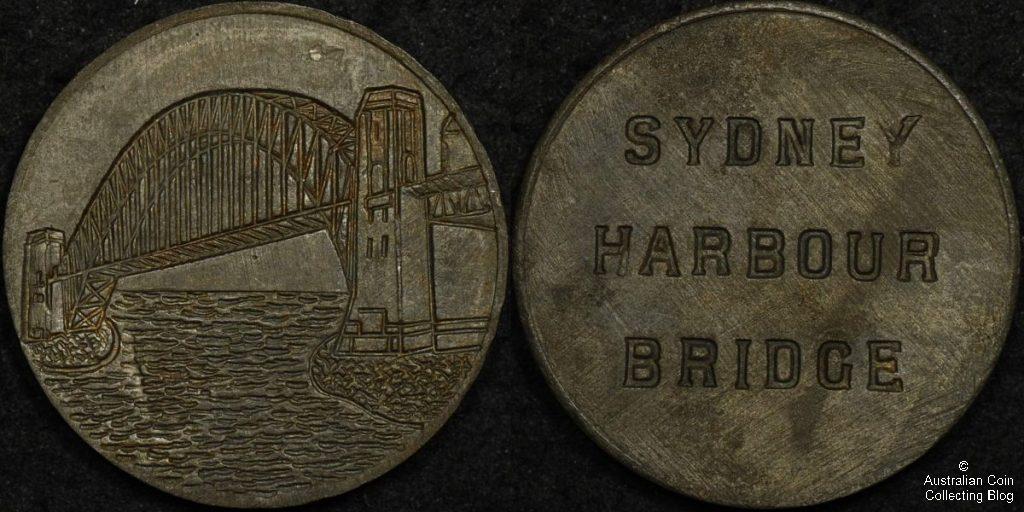 Here we have one of those rivets, or at least a slice of a rivet that was surplus to use in the bridge. These commemorative medals were struck on planchets made from slices of the excess steel rivets made by McPhersons P/L of Melbourne. It’s not known who was responsible for these but this example comes from the collection of a very good friend who saw my face light up when I saw he had one of these hard-to-find medals in such good condition.

In Commemoration of the Bridge Locking (Image Courtesy: Noble Numismatics) 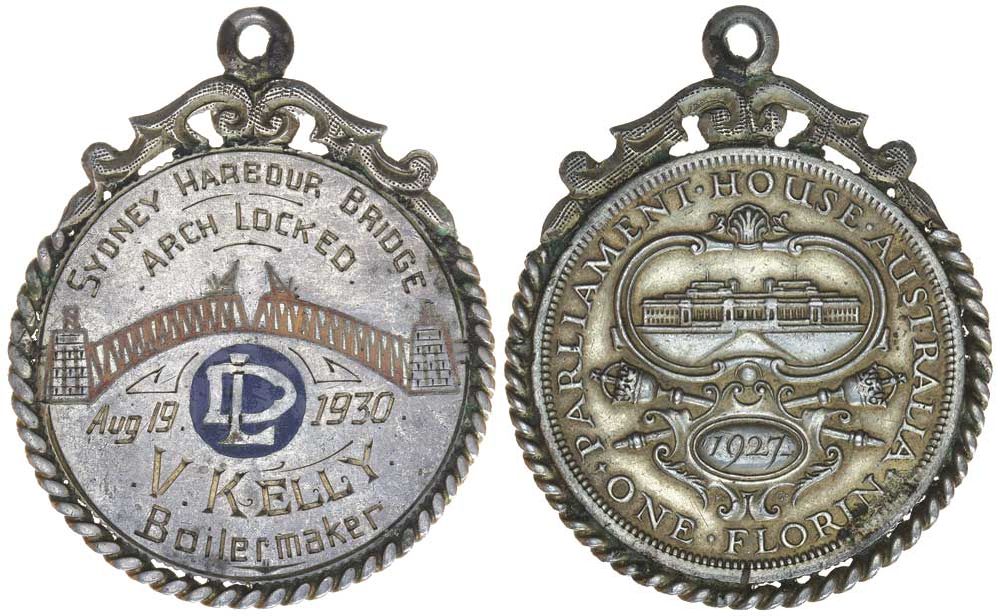 Construction began from each side until meeting in the middle, this milestone reached 19th August 1930 just shy of 2 years after the arch construction began. In this afternoon the two halves met but celebrations were short-lived because expansion and contraction of the metal caused the bridge to separate again. They were rejoined later that evening. The tokens seen here were made at the time to commemorate the event and were sold at Noble Numismatics. 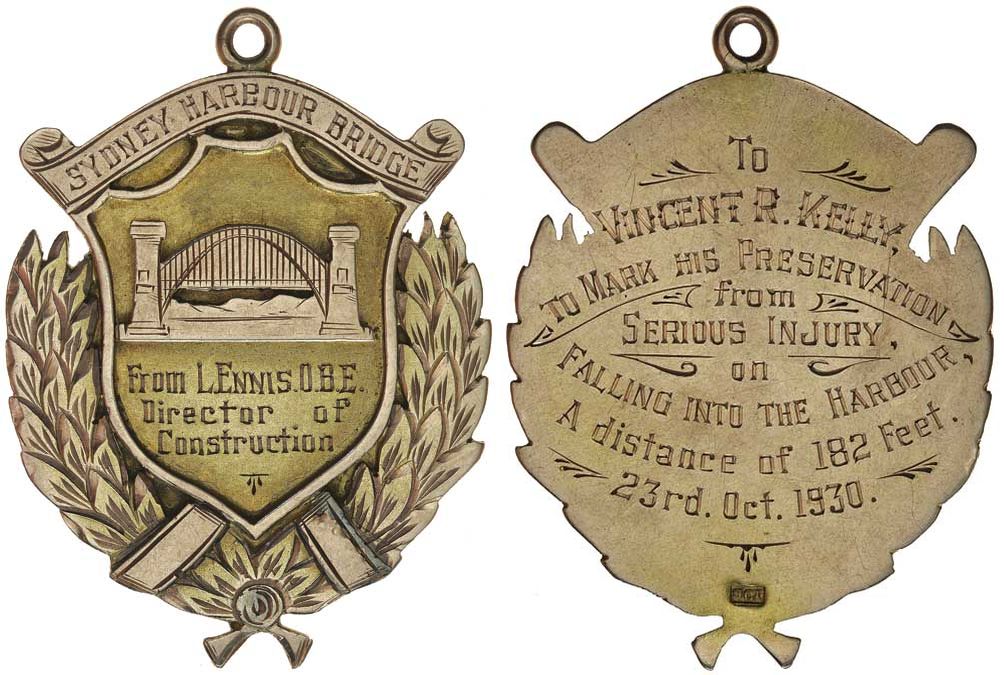 Sixteen workers lost their lives during the build project, surprisingly only two from falling from the bridge. One gent, Irish boilermaker 31-year-old Vincent Roy Kelly who fell 55m even survived! Mr. Kelly was using his heavy riveting gun when he lost his footing, onlookers were amazed as they watched him somersault and enter the water feet first. Mr. Kelly dropped his tool belt which hit the water first, breaking his fall and he clambered aboard a passing barge in shock with just two broken ribs. He was presented with this medal and a gold watch.

The medal is inscribed “To Vincent R Kelly, to mark his preservation from serious injury, on falling into the harbour, a distance of 182 feet. 23rd Oct. 1930” and was sold at a Nobles auction in 2012, I believe it is now in a museum. The front of the medal depicts the bridge and is inscribed from L. Ennis O.B.E Director of Construction. Lawrence Ennis, a Scottish engineer was managing director of Dorman Long & Co the British company contracted to build the bridge. He was construction supervisor for the project, the likes of which had never been attempted before in Australia on such a scale.

The bridge was opened with pompous fanfare (and a public holiday!) on 19th March 1932 in the presence of the Governor of NSW Sir Philip Game, Lawrence Ennis and NSW Premier Jack Lang. Lang was to cut a ribbon with a pair of ornate golden opal studded ceremonial scissors. Let us digress for just a moment on these scissors. Inscribed “Presented to the Hon. J.T Lang Premier & Treasurer NSW by Dorman Long & Co Ltd Contractors” they were designed by Vambola Veinberg who went on to the be the first chief engraver at the Royal Australian Mint. They were made by craftsmen at Angus and Coote jeweller using 9 carat Australian gold, hand-wrought with flannel flowers, waratahs and gum leaves set with six flame-coloured opals around a model of the bridge. This is a bit of a tangent of collecting for myself as coin designers almost always have creativity in their blood making all kinds of sculptural or precious metal pieces aside from coins and medals.

Back to the opening of the bridge where more than 750,000 people gathered around the harbour on a Saturday in March 1932. The ornate scissors would cut the ribbon to open the bridge but not before an incident most grand. 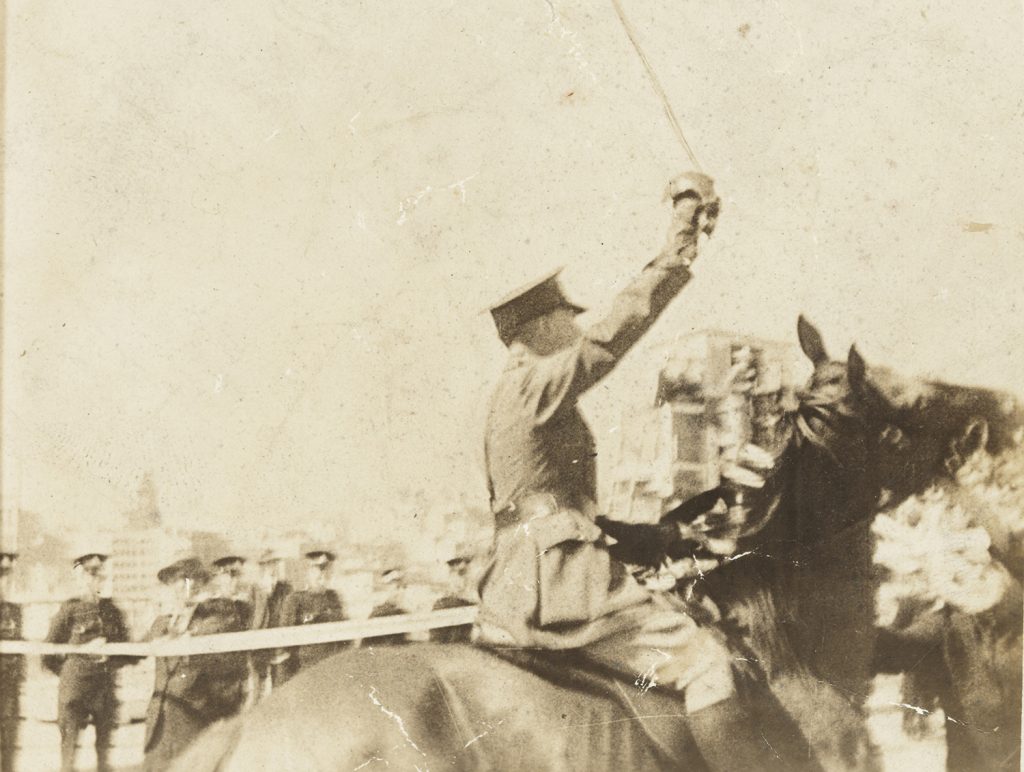 Irishman Francis de Groot infamously garnered enduring notoriety in Australian folklore when, on horseback he slashed the ribbon with his cavalry sword before officials could claiming

“I open this bridge in the name of His Majesty the King and all the decent citizens of NSW.”

His organisation, the New Guard (a right-wing, loyal to the British Empire, anti-union and anti-Labor govt at time), had resented the fact that King George V had not been asked to open the bridge. He was then escorted away by police and the ribbon retied for the official cut. De Groot was fined £5 (+£4 in costs) for offensive behaviour (he later sued and was awarded a substantial settlement). Celebrations for the opening of the bridge were like nothing Sydney had ever seen before. A human tide followed a marching pageant of floats that highlighted significant events in the nation’s history, Captain Cook’s landing, the arrival of the First Fleet, Indigenous Australians, Bridge workers, the armed forces, schoolchildren and lifesavers with sydneysiders cheering from every window and balcony along the way. People also flocked to the foreshores to view a flotilla of ships and boats passing down Sydney Harbour and under the Bridge. The Royal Australian Air Force also gave an aerial display. After the official opening there was a 21-gun salute and the public was permitted to walk across the Bridge. The evening featured a firework display, as well as formal balls and dinners. In the lead-up to the opening, sporting competitions were held, including sailing races, athletics, tennis and cricket matches. 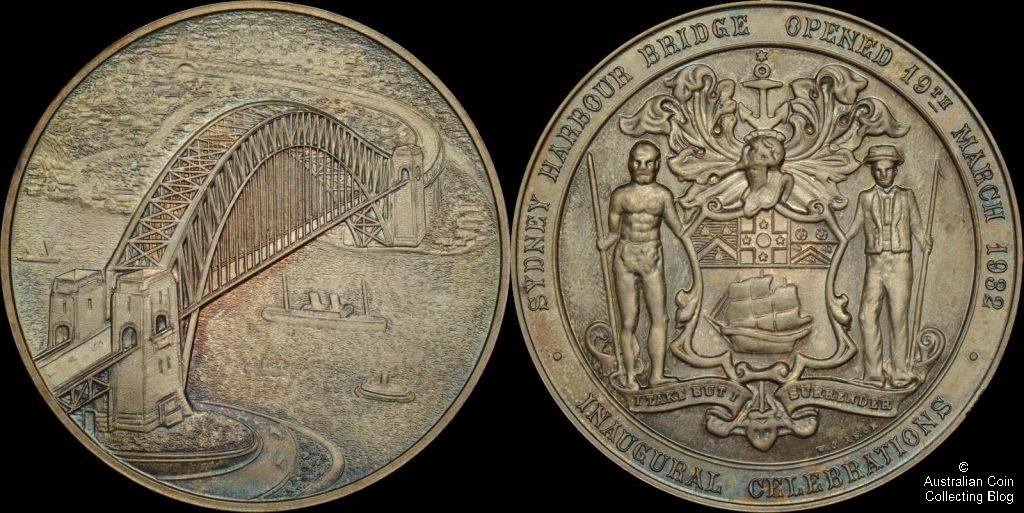 This 51mm beautifully toned silver medal commemorating the opening is edge inscribed and was awarded to an amateur girls’ sports team called the Kookaburras who played basketball in the inaugural celebrations in the weeks around the bridge opening. 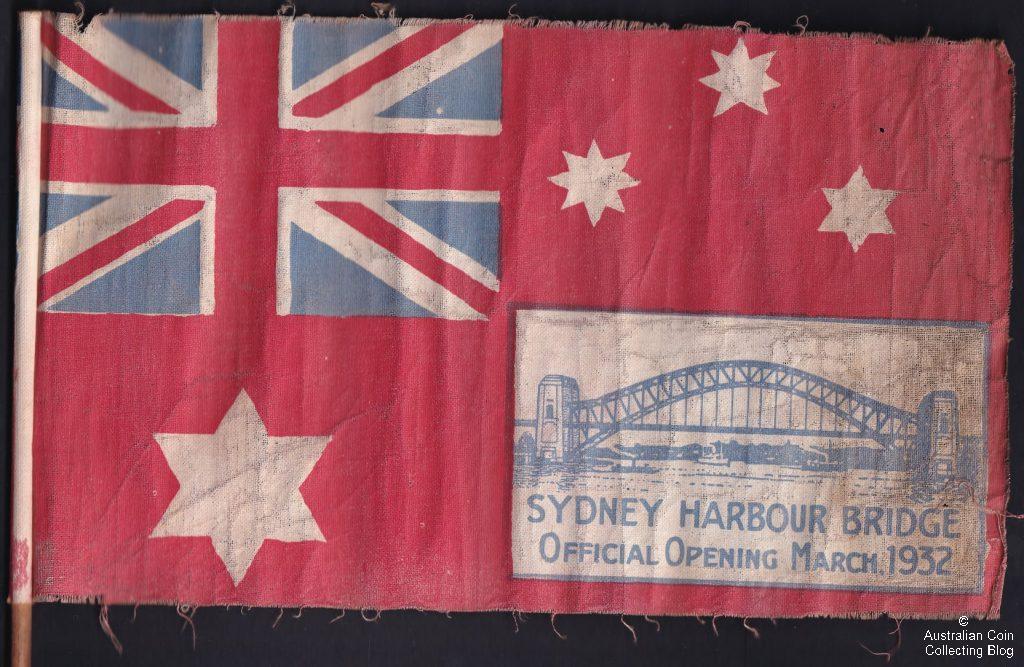 Many collectables and ephemera were produced and kept to remember this special time. We have a cloth flag flown by an eager young boy (5) who was present at the opening ceremony. The only other example of this flag we’ve seen resides in a museum. This medal has an attached pin which would have been purchased at the time and the pin used to affix it to clothing worn. It celebrates the pageant on the opening day. This 25mm gold coloured gilt medal struck by Amor is interesting as it depicts Captain James Cook and was issued by the business of James Cook, a baker in the suburb of Paddington. The depiction of Captain Cook was the company’s logo. Marcus Clark was a department store in 1932 which is now part of today’s Harvey Norman (Norman Ross took over Waltons who took over Marcus Clark). This 39mm brass advertising medallion promoting ‘The Big Store’ can be found in many collections. From our research in old newspapers at the time this store (any many other retailers) was selling various bridge novelties as collectable items commemorating the opening. This medal was given away free to all shoppers on Friday and Saturday 8-9th April 1932. It is touted as being coated with pure Australian gold and a valuable souvenir but can be picked up for about $20-30 today. To recoup the expense of the building of the bridge a Toll was charged to cross. Initially in 1932 the toll was sixpence for each car, threepence for adult passengers and a penny for the children all calculated as you crossed. The toll charge for other vehicles varied and when seven elephants from a passing circus crossed, they were charged tuppence each. In 1960 due to traffic congestion this was reduced to a flat fee per vehicle, a car being one shilling. In 1966 at decimal changeover the toll was 20c per car which increased to $1 in 1987, then in 1989 to $1.50. Around 1990 toll tokens were introduced, these were minted in Canberra at the Royal Australian Mint and had the bridge depicted on one side and a waratah flower on the other. I’ve searched in Mint annual reports of the period and determined that they likely minted almost a quarter of a million tokens for use in bridge crossings.

The 10 million dollars build cost loan didn’t get paid off until 1988 which coincided with construction of the Sydney Harbour Tunnel. I’ll conclude my discussion with another fun fact about the bridge. A total of 272,000 litres of paint were applied by brush to the bridge in 3 coats ahead of the opening. These days lead paint is being removed, two robots and more than 100 people are working on repainting four layers of paint, a zinc-green, red and black undercoat followed by ‘Sydney Harbour Bridge Grey’ which is a special colour not available for any other person or use.