Home › Coin News › Perth Mint Off Metal Trial Strikes – What are they?

Perth Mint Off Metal Trial Strikes – What are they?

Update 2 – We’ve been in contact with the Perth Mint, mystery solved!

Update 1 – We got our hands on some “trial strikes”!

Back in 2010 I saw my first off metal Perth Mint “trial strike” in the auction lots of a well known Queensland auction house. It was uniface, made from aluminium and showed the reverse design of a 10 ounce kookaburra coin. Right now I can’t remember what year the “trial strike” was but it was from the early 1990’s. Over the ensuing years I’d seen several more appear from time to time in auctions and on eBay, where they tended to sell between $200 and $500 dollars and mostly be dated from the early 1990’s. It always baffled me how so many “trial strikes” escaped into the wild and I had always assumed that they were not trial strikes at all but paper weights with the felt removed. Perth Mint DO make coin shaped paperweights (see here for an example) and based on emails I sent to the Perth Mint they have done so for a long period of time. 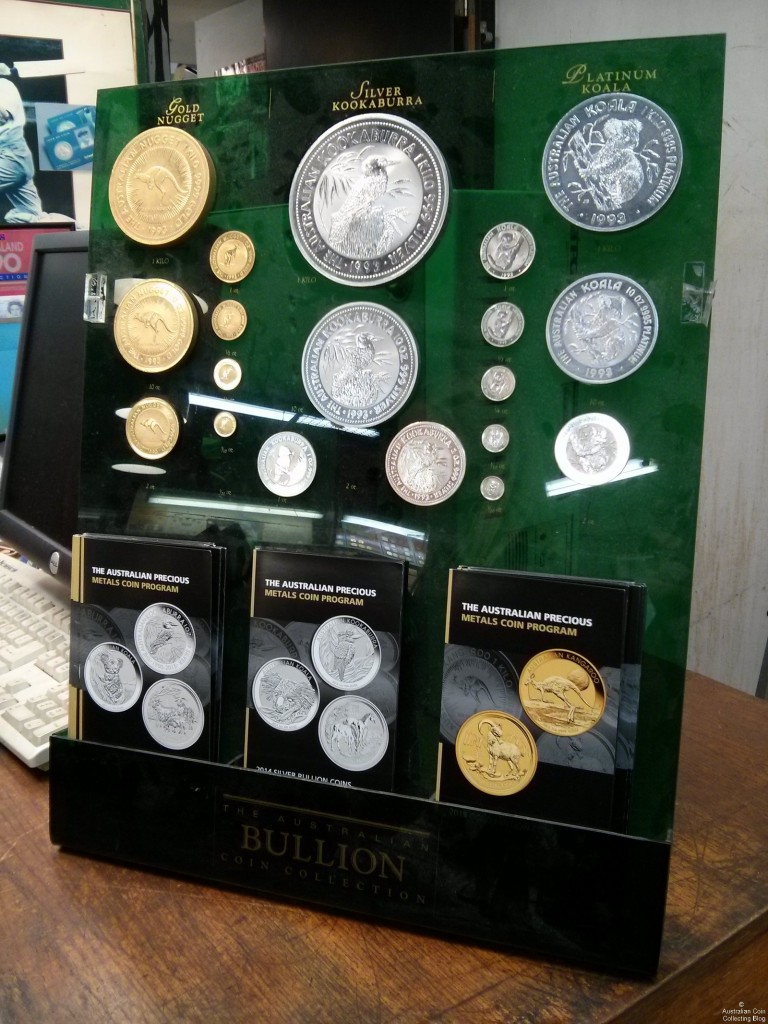 The Perth Mint Advertising Board

It’s a lovely marketing board (we know now these are called Portfolio Boards) showing all of the coins available from the Perth Mint back in 1993. And hey look it’s covered in representations (or facsimiles) of Perth Mint coins….made from some sort of white metal. I couldn’t get one off to hold it but I strongly doubt the items representing the silver coins were silver any more than those representing gold or platinum coins were gold or platinum! Here’s a closer view: 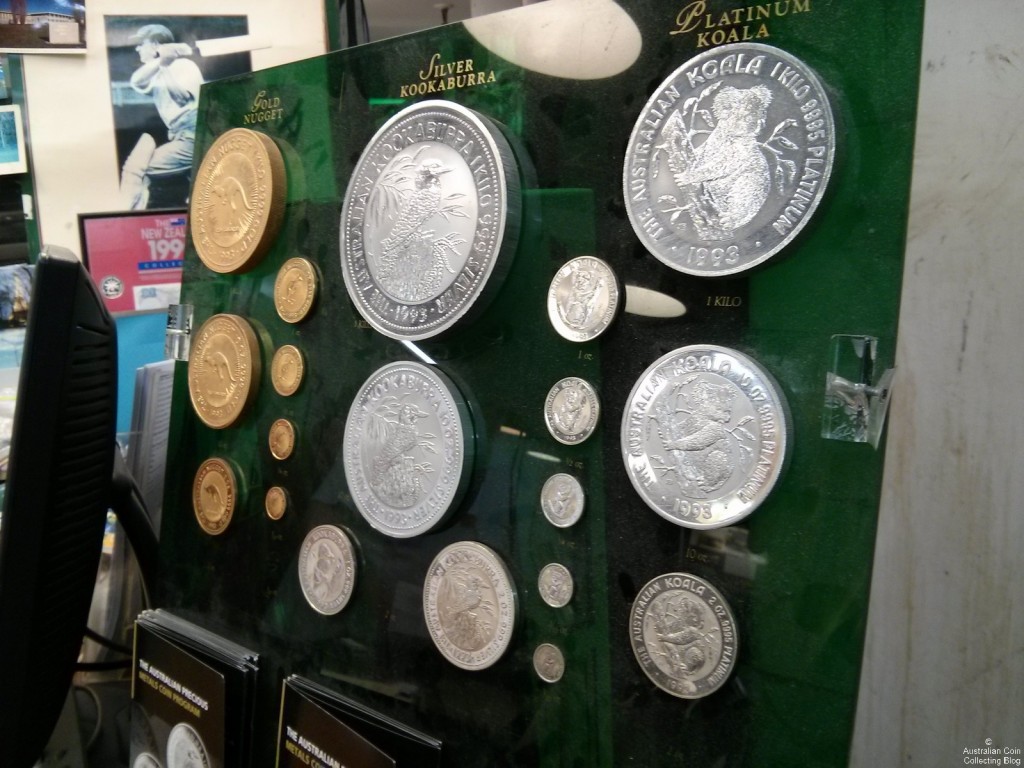 Close up image of advertising board.

And are they uniface? Well I am glad you asked, yes they are! 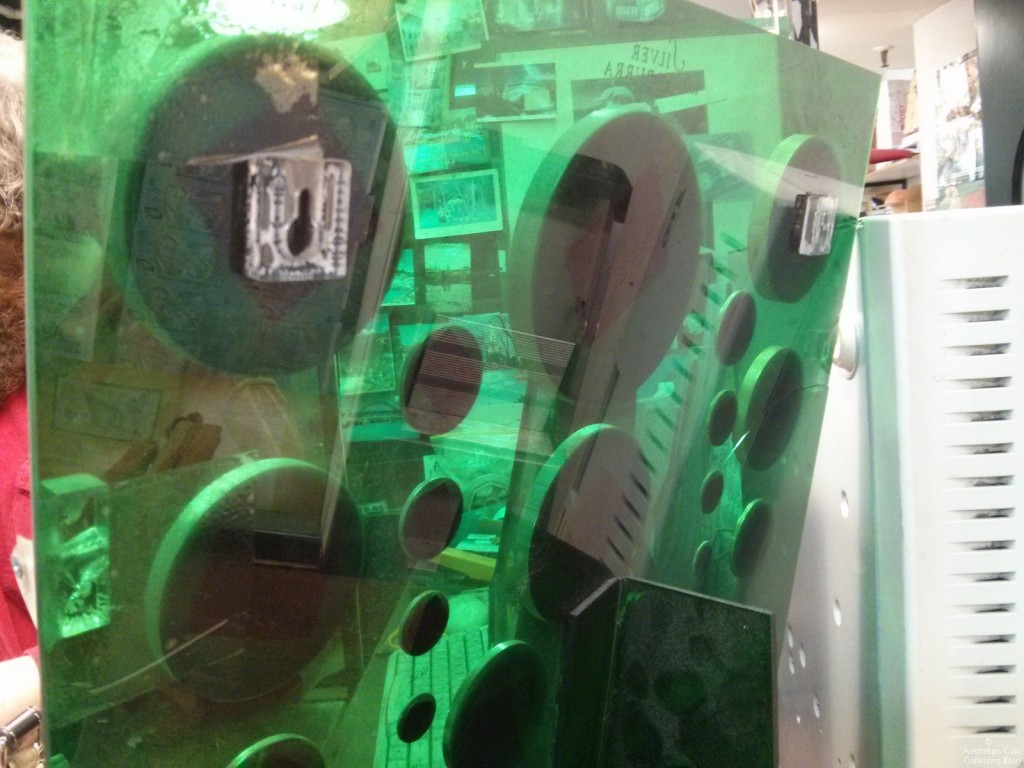 Reverse image – Yes they are uniface!

It’s not entirely clear from the image but the “coins” were definitely uniface.

As far as I am concerned, that’s mystery solved about the so called Perth Mint uniface trial strikes struck in aluminium. They are almost certainly pieces removed from these nice looking Perth Mint Port Folio Boards.

A reader of this blog has sent us in some Perth Mint advertising items which you can see below. He bought them at a coin shop in Melbourne. The larger uniface item weights 7.32g and has diameter of 25.05mm. It represents the 1994 1/2 ounce platinum coin and when purchased was described by the coin dealer as coming from a Perth Mint advertising board similar to that shown above. The smaller item with the pad-printed monkey is 15.82mm in diameter and weighs 2.41g. When purchased it was described as a promotional item given by the Perth Mint to international dealers to promote their 2004 lunar coin program. 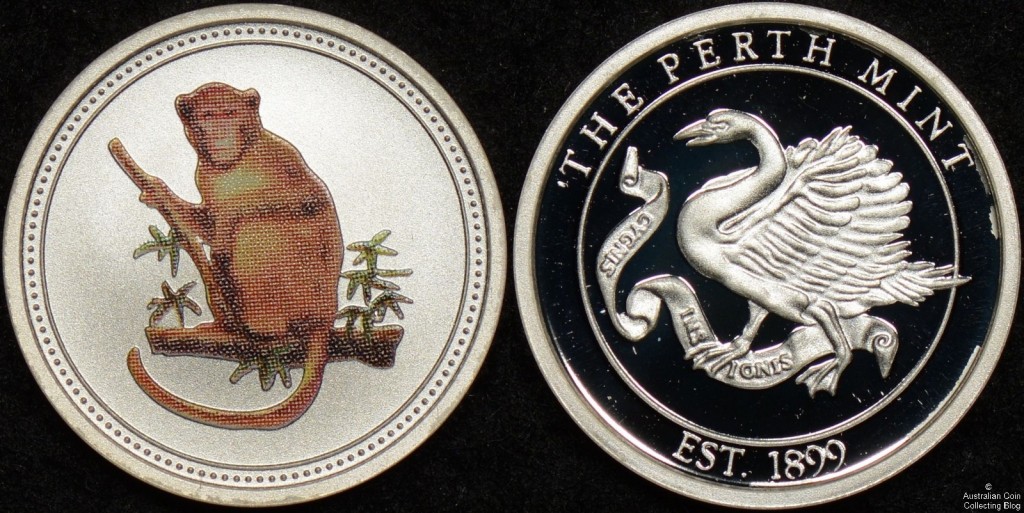 We’ve been in contact with Pauline Burns, the senior customer services office from the Perth Mint. Here’s what she had to say with regards to both the items imaged above:

I have referred your email to our Marketing division and confirm the following.

The Monkey Medallion was Silver and made by The Perth Mint purely as a promotional piece.
2004 was the first time the mint had struck Coloured Australian Lunar.

The Koala Facsimiles are silver plated Copper – these were stuck onto Portfolio Boards for display at various conventions etc. They were made for a number of years.

So, that answers the question regarding the small pad-printed item, it is silver and it was struck as a promotional item. Pauline also supplied some Perth Mint production paperwork along with her email that called that item a Miniature Silver Monkey Medallion, that it was struck from 999 silver and had a nominal mass of 2g (despite our item weighing about 0.5g more). It confirms what the larger “Koala Facsimile” is too, a silver plated copper item designed for a “Portfolio Board”. However, there remains one question outstanding, what about the aluminium uniface trial strikes that spawned this entire blog article? Well, we shot off another email to Pauline and she answered very quickly with:

Bingo. There’s our answer, the facsimile uniface kookaburras for the Portfolio Boards are silver plated aluminium. The facsimiles of the gold kangaroos and the platinum koalas are plated copper! Mystery solved!

As part of our project to create an online index for the Australian Coin Review magazine we’ve just confirmed that this issue with Perth Mint Facsimile Advertising items has been going on for more than 20 years! On page 9 of the October 1994 issue of The Australian Coin Review there’s an article titled “All That Glitters” concerning electroplated bronze facsimile coins made for the Monex Deposit Company in the USA. The article says:

They are the same size as the one ounce gold nugget and the one ounce platinum koala. The reverse design is also identical, even to the specification of the metal.

It appears that these facsimile coins also had an identical obverse design and the only way to pick them from the real McCoy was to pick them up as they only weighed about half an ounce rather than the full ounce. Here comes the rub though, someone passed them off as real bullion:

Naturally, some bright spark has loaded up two Californian dealers with a couple of pairs of these pieces in a quantity of other bullion and one of the dealers is somewhat irate.

Turns out the Perth Mint thought the weight difference would be enough to make the origins of these items obvious. Nope. The article goes on to say that the Perth Mint would include “Replica Not Gold (or Platinum)” on the reverse of the advertising pieces from that point forward. While not exactly the same issue as the uniface advertising pieces it highlights the dangers of items that are not clearly marked for what they really are!

On a recent trip to Melbourne we saw a facsimile of a 1 kilo 1993 Platinum Koala in a major dealer’s display cabinet. It wasn’t for sale but the dealer kindly agreed to loan it to us so we could take a picture of it. We asked the dealer if he knew what the item was, he said, “sure it’s an advertising piece made by the Perth Mint and it’s silver plated copper”. Eureka! It looks like the message is spreading regarding the true origins of these items. He wasn’t quite right though, it’s silver plated aluminium. You can see our image of the advertising piece below, it is 73mm in diameter and weighs 111 grams. Amusingly enough is still has the double sided tape on the reverse so it can be stuck to an advertising board.

For those who like a bit of maths, the specific gravity of platinum is 21.45 while that of Aluminium ranges from 2.5 to 2.8. Given that the size of the above planchet is the same as a real 1 kilo platinum coin this means if it really is struck in aluminium it should weight 115g to 131g. Which is just a few grams more than what this facsimile weighs.