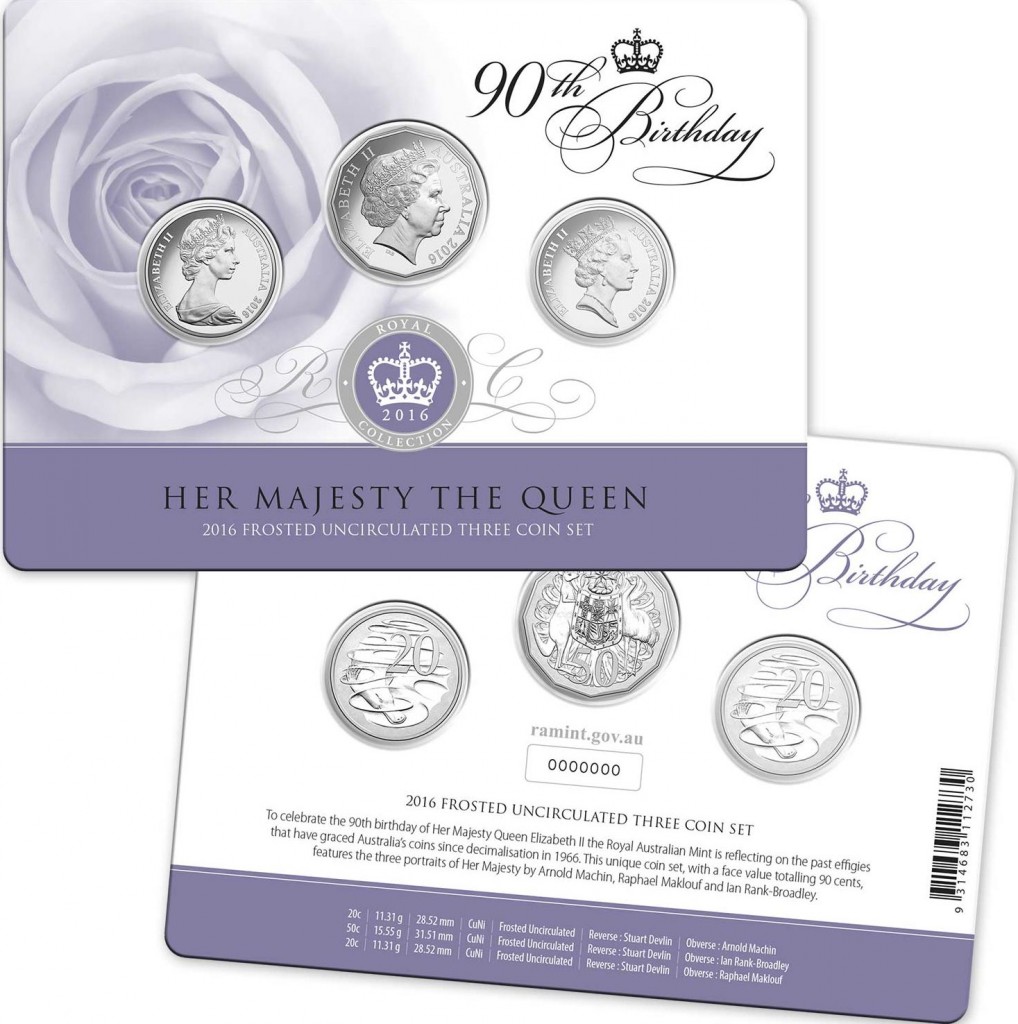 Queen Elizabeth II celebrated her 90th birthday on 21st April 2016 and Australia* will holiday for the occasion on June 13th. Our national public holiday marks the closing date to pre-order a commemorative 3 coin set released for the Queen’s birthday. The Royal Australian Mint is releasing this set on a made-to-order basis so a pre-order is a must.

The set features 3 coins, a 50 cent and two 20 cent pieces totalling face value of 90 cents! At first glance these coins look like standard designs you’d find in your change. They are, but with a bit of a twist. All three coins are dated 2016 but each depict the different portraits used on decimal currency in Australia for Her Majesty over the last 50 years**. The 20 cents each bear the Arnold Machin and Raphael Maklouf portaits, the Machin used 1966-1984 and the Maklouf used from 1985-1998. The dodecagonal 50 cent bears the current Ian Rank-Broadley obverse (note it’s standard and not commemorative for the 50th anniversary of decimal currency). Each coin has the standard reverse design of Stuart Devlin’s platypus and the Australian Coat of Arms.

The coins are struck in standard cupro-nickel and have a frosted uncirculated finish. Issue price for this set is $25. The mintage of these coins will be decided by collectors.

Additional information: 7/9/16 The closing date passed and the mintage of this 3 coin set was set at 9,108. Each set is individually numbered. In true RAM style it’s come to light that pre-ordering these sets is not the only way to secure these coins with new Australia Post PNC’s available for each of the 3 coins. 1966 Machin PNC, 1985 Maklouf PNC and 1998 Rank-Broadley PNC’s are being sold by AP for $17.95 with a capped mintage of 9,000 PNC’s each.
3/11/16 Adding to this, yet another PNC, this time a prestige 3 coin PNC has also been issued by Australia post for $59.95 with a mintage of 1,926 produced.