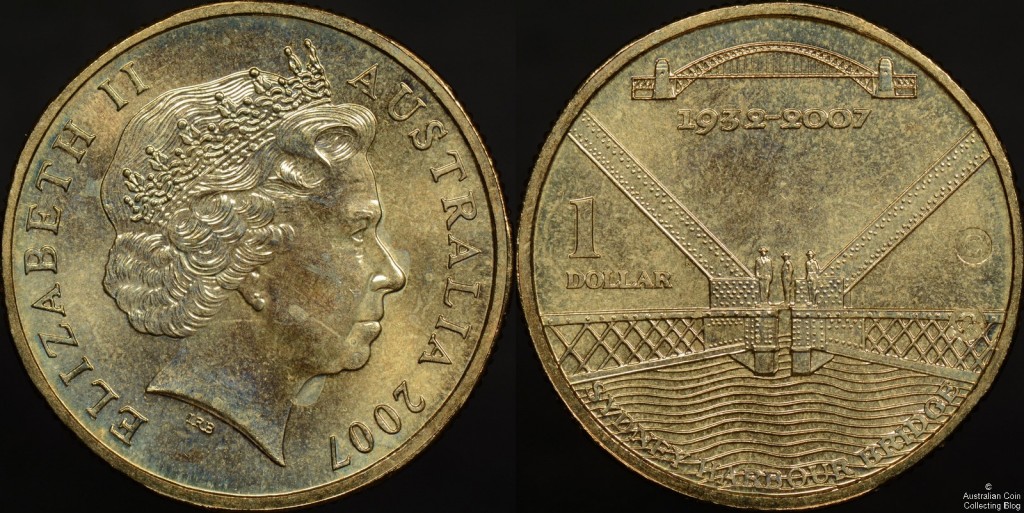 2007 saw the 75th anniversary of the completion of the Sydney Harbour Bridge. The bridge has become a national icon for Australia recognised all over the world. It was opened on 19th March 1932 after 8 years of construction with planning beginning in 1912.

At it’s highest point the bridge measures 134 metres tall and spans 503 metres with a total length of 1150 metres. At 49 metres wide the expanse of the bridge truly makes it an international visitor attraction. The bridge was built from each side with approach spans erected first then a main arch. Both sides of the arch were joined on August 19th 1930 much to the admiration of Sydney-siders. The road deck was then hung from the arch. The bridge contains 52,800 tonnes of steel-work and 17,000 tonnes of granite. The arch itself weighs 39,000 tonnes.

The joining of the two sides is the design depicted on the one dollar coin by Wojciech Pietranik. The obverse carries the Ian Rank-Broadley effigy of Queen Elizabeth II. There were a lot of differing mint mark issues of the Sydney Harbour Bridge dollar released in 2007. The Royal Australian Mint brought their portable press to many venues throughout the year, including the Capital Collectables Show in Canberra, Sydney Royal Easter Show, Brisbane ANDA show and Melbourne ANDA show. Coins struck on the portable press show a shallower strike than those struck on the main production presses at the RAM. A B mintmark coin in folder was overprinted for the World Money fair in Berlin. There have been a few examples arise of coins accidentally struck without a mint-mark, these demand quite a high premium. In addition there have been a very few of these coins that were struck with two mintmarks, and you can see one of these in the image at the top of this article.

All mint mark coins discussed above were struck in aluminium bronze weighing 9 grams. They are the standard circulation dollar size of 25mm in diameter but were not released into circulation. An S mint-mark coin was available in a joint Australia Post/RAM PNC (postal numismatic cover). A pure silver proof dollar without a mintmark was also released in a presentation case for $40.