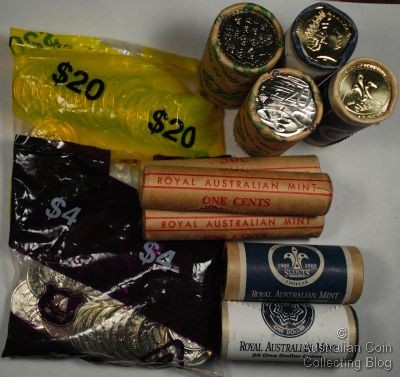 A selection of Mint Rolls, Security Rolls and Security Bags

All coins received by the security companies are poured into hoppers, fed through and counted into rolls or bags in these denominations. Security companies do this with new coin and also recovered circulated coins from their clients.

Here’s the dilemma with getting rolled coins from security companies. It’s not always certain that all coins in the roll are new coins. The end coins may be new but the coins within the roll could be recirculated currency. It’s pot luck unless you have been there and seen all new coins fed into the hopper of the rolling machine. Often though it is safe to assume all coins are new if one or more rolls have been cracked open and it’s determined that the batch is of all new coin. With mint bags it’s easier because you can see the coins within the packaging. Mint bags have a downside in that the coins are free to move within the bag thus sustain damage.

In the past coins have also been rolled by the Reserve Bank prior to distribution after leaving the mint. Who rolled the coins can be determined by reading the labelling on the paper of the wrapper.

Just recently the RAM has returned to rolling coins themselves. It’s common to find early decimal rolls in RAM paper. You used to be able to buy rolled new coin directly from the mint but they ceased doing this years ago. Since 2007 the RAM has been selling special rolls of commemorative dollar coins in specially designed paper. These rolls were collector only issues and include: