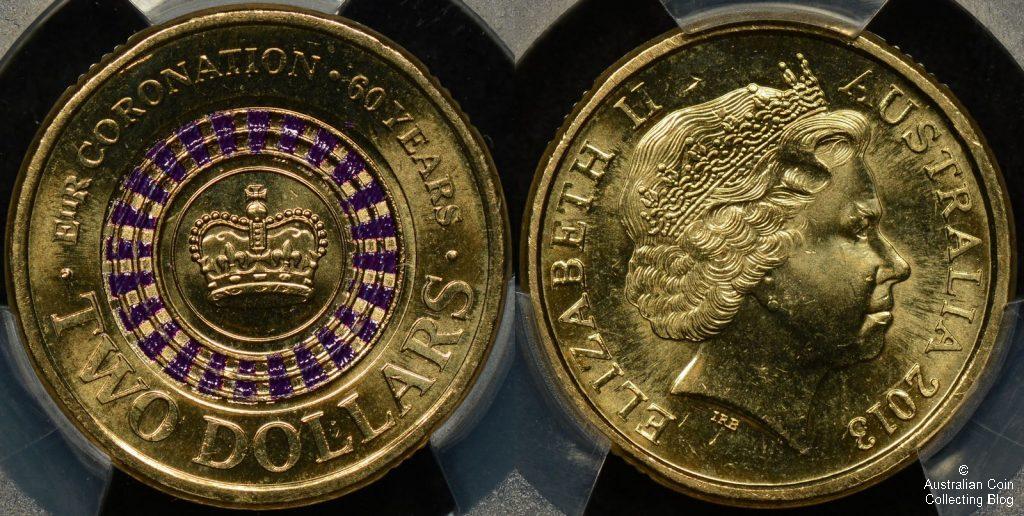 The 2013 Purple Coronation Two Dollar Coin (affectionately known as the “Coro”) is probably the second most popular coin of that denomination amongst collectors. While it’s not technically the first Australian coloured coin issued for circulation (the 2012 Red Poppy $2 coin holds that honour) it is the first coloured coin designed to withstand the rigours of circulation. The technology used to apply the purple paint on the 2013 Coronation $2 was different to that on the 2012 red poppy $2 and made the 2013 coin able to circulate without the paint being removed easily.

Being such a popular coin amongst collectors a very common question is, what exactly is the 2013 Purple Coronation Two Dollar coin worth? Before answering that question we must understand the two different forms it was issued in. A regular circulation coin was minted for general distribution via security companies with 995,000 of those coins minted. 34,967 special collector only “C” mintmark Purple $2 coins were issued in a capsule in a folder. These collector folders had a release price of $12.95.

As usual on this site we need to tell you a few things about the values in this article. Firstly, these values are RETAIL values, if you’re selling on eBay you might get these but remember eBay takes a cut. If you’re selling to a dealer expect to get about 20% to 50% less than the prices quoted. Second thing to realise is that the prices are current at time of writing (April 2021). To get an idea of values right now try checking out some of the sold ebay results for the different issues below:

Right now an average circulated purple coronation $2 in EF or better grade might sell for $30-$40. A genuinely uncirculated example seems to fetch $50-$75. Of course genuinely uncirculated examples are not seen very often and we’ve seen very few in several years of collecting. This coin is one of those that gets a bit more if it’s uncirculated and graded by PCGS (see here for PCGS graded sales results on eBay). At time of writing an MS64 appears to be selling for about $100, MS65’s for about $120, and MS66’s for up to $175-$200.

Circulation purple coronations in original security bags or rolls seem to carry a premium over individual coins. 25 coin purple coronation bags have a value of about about $1500 (see here for Coronation $2 bag sales results on eBay). 2013 Purple Coronation coin roll values (security or Imperial / Cotton Co.) sit in a wide range from $1700 up to nearly $4,000. We’d advise caution when valuing rolls but we’d tentatively put a realistic retail value on purple coro rolls at $2750.

One other way the coin can be obtained is via the Royal Australian Mint in 5 coin bags that were branded by the Mint. Collectors were invited along to events held by the Mint in 2013 and your pocket change could be swapped for new shiny purple coloured coins in bags of five. These collectable little bags are worth $400-$500 each. 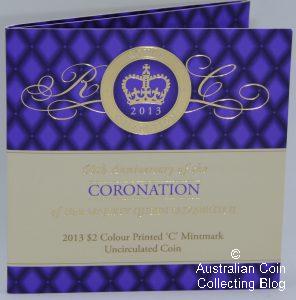 A ‘C’ mintmark Purple Coronation $2 in a well kept ‘tri-fold’ folder might be worth $400-$500 right now, which is a couple of hundred dollars less than what they sold for in 2020. At the time of writing there were no eBay sold results for PCGS graded 2013 Coronation ‘C’ mintmark coins. However, we’d expect that those would sell for a very small premium above none-graded examples. Generally the quality of the 2013 ‘C’ mintmark coronations was excellent and third party grading seems to add little value.