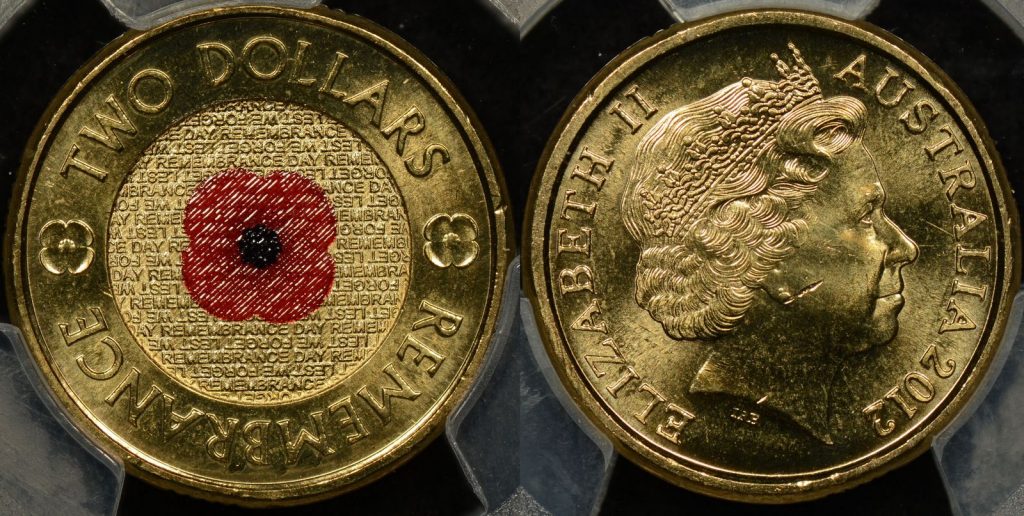 The 2012 Remembrance Day red poppy two dollar coin is almost certainly the most popular $2 coin among Australian coin collectors. A common question from new and experienced collectors is what is the 2012 red poppy $2 coin actually worth? Well, like most questions in coin collecting, the answer is, it depends. It’s worth a quick look at how the coin was issued before we get into values. The coin itself was never intended to circulate and the colour was applied with a pad printing process and was not very durable. As a non-circulating design with a mintage of just 503,000 it was initially released via the Returned Services League (RSL). The coins were supplied to the RSL in Chubb security rolls of 25 coins. These rolls had dark green paper with black writing that read “$50 Two Dollar Coins” and included the Chubb logo.

RSL staff and volunteers broke open the rolls and released the coins with a collector card. They initially glued (yes glued) the coin to the card with a silicon adhesive. When told this was harmful to the coin they then put the coin in a ziplock baggie and either stapled this to the card or supplied the coin in the baggie loose with the card. Release price of the coin with the card was a $10 donation to the RSL. This was a cost of $2 to the RSL and a profit to the RSL as a fund raising activity. At this time some RSL branches were also selling entire rolls of the coins because they couldn’t dispose of red poppy $2 coins with cards fast enough.

The Two Dollar Remembrance Day Red Poppy coin was also struck with a ‘C’ mintmark, the ‘C’ representing Canberra. 40,902 of the ‘C’ Mintmark red poppies were produced and issued in a mix of cards and postal numismatic covers (PNCs). The most common way you’ll see these mintmark poppies is in a capsule housed in a cardboard ‘tri-fold’ folder that were issued for $12.95. The ‘C’ mintmark coin was also released in a 2012 PNC by Australia Post for $19.95. The “C” mintmark red poppy was also released in 2014 PNC that included the 2014 Green Dove Remembrance $2 coin.

Before we get started on values it’s important to realise two things. Firstly, these values are RETAIL values, if you’re selling on eBay you might get these but remember eBay takes a cut. If you’re selling to a dealer expect to get about 20% to 50% less than the prices quoted. Second thing to realise is that the prices are current at time of writing (July 2020). To get an idea of values right now try checking out

Right now for a nice uncirculated 2012 red poppy $2 coin you can expect to get $100-$150 for your coin. If it includes an RSL collector card add $10 to that. If your coin is one of those that was glued to the card and is now toned expect to get $20-$30 less. PCGS graded 2012 red poppies really only start to be worth more than non graded examples in PCGS MS66 or higher. At that point you might get $200, or in MS67 $300. If you want to see what red poppies are going for on eBay right now

then click this link to be taken to eBay.

There is one other popular way you might see the no mintmark 2012 Red Poppy, and that’s in a capsule on red and black information card that was issued by Downies Coins. These (at the time of writing) sell for about $200 or so. We find this a bit odd as the quality of the coins on these cards is typically WORSE than those found with the RSL Collector cards.

It’s important to note a major factor in the value of your coin and that’s the condition of the paint. Chipped paint poppies generally sell for much less than a full paint poppy example. Back in 2012 when the RSL were opening rolls of coins they typically banked poor paint examples as they were deemed unsaleable at the $10 rate. 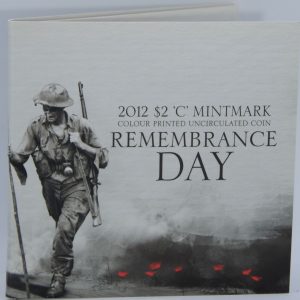 A ‘C’ mintmark red poppy in a well kept ‘tri-fold’ folder might be worth $300-$400 right now. One in a 2012 Australia Post Red Poppy PNC would be worth a very similar amount as would the 2014 PNC that includes the 2014 Green Remembrance $2 coin. If you want to see what ‘C’ mintmark 2012 red poppies are going for on ebay right now

click this link to be taken to eBay. If you want to see what the PNC’s are going for then

Original Chubb security rolls of 2012 Red Poppies are very valuable, selling for $2500 to $4,000. Often they sell for more than the value of the individual coins which is very unusual. If you’re interested in purchasing a roll we suggest sticking to those with Chubb paper. Some sellers suggest that some rolls were released in plain brown paper, however we handled several hundred original rolls back in 2012 and only EVER saw those in green paper. If you intend to open the roll to cash in then remember the original rolling process wasn’t beneficial to the paint applied to the coin and you should expect to see some coins with chipped paint inside.

Click this link to be taken to eBay and go crazy!