Home › Collecting Coins › What is the 1954 Royal Visit Florin Worth?

What is the 1954 Royal Visit Florin Worth?

The 1954 Royal Visit florin can be seen above, it’s one of four commemorative Australian florins issued from 1910 to 1963. It also happens to be the last commemorative florin issued in Australia. The obverse (heads) side of the coin displays a portrait of a young Queen Elizabeth II while the reverse depicts at lion and kangaroo standing shoulder to shoulder facing right (perhaps they are watching an Ashes test?). The coin itself commemorates the 1954 visit of the Queen to Australia, her first visit to the country after her coronation in 1952. And thus, the coin is known as the “Royal Visit Florin”. If you want to read more about the origins of the the Royal Visit florin, who designed it, and why at the time the Australian public didn’t think too much of it then you should read this Royal Visit Florin article.

So, what’s a 1954 Royal Visit Florin worth? It’s actually about the cheapest of the four commemoratives to add to a collection, ranging in price from just a few dollars for a circulated coin to under $100 for a lovely choice uncirculated example.

What is a Circulated 1954 Royal Visit Florin Worth?

These florins are post 1945 and hence 50% silver, weighing in at 11.3 grams they contain about 0.18 of an ounce of real silver. This makes the bullion value AUD $5.74 (price updated daily) and if you’re buying a well circulated coin we wouldn’t advise spending any more than that. Royal Visit florins are almost always found in bulk silver lots which indicates that the Australian public at the time had no compunction about spending them. If you’re selling a circulated royal visit florin to a dealer or on eBay you’ll be lucky to get more than bullion value for it unless it has a good amount of remaining lustre (say EF to AU), and even then $10 might be all you’ll see. 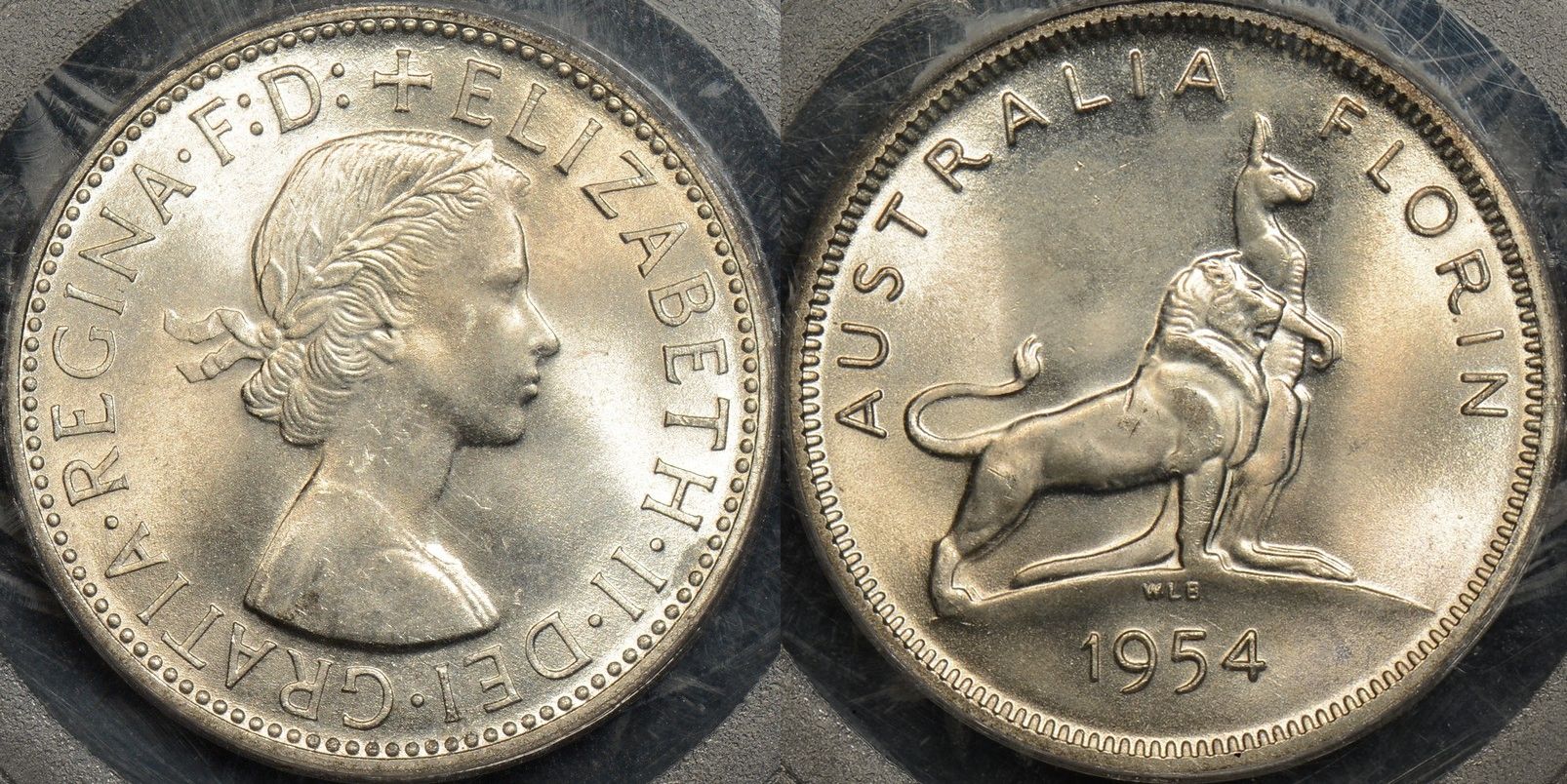 What is an Uncirculated Royal Visit Florin Worth?

Just like the other three florins that commemorated other events the Royal Visit florin was often put to one side by the Australian public who noticed something different about the design of the coin. As a consequence you can find uncirculated examples of the coin quite easily, either sitting in dealers books or for sale on eBay. We wouldn’t advise spending more than $30 or so for a regular uncirculated coin given that a PCGS MS63 graded coin (like that shown above) would be worth something less than $50. If you’re selling an uncirculated coin to a dealer you might get $20 for it and get a similar price on eBay if you’ve got good photos of the coin.

Better grade Royal Visit florins are a little more valuable, for example a nice PCGS MS64 graded coin (see below) can be had for anything between $100 and $200. Of course, if you’re selling to a dealer expect a lot less than this and if you’re selling on eBay expect something at the bottom end of the price range and you’ll have to wait a while to get it. There’s always a few PCGS MS64 graded Royal Visit florins available on that online garage sale site and they move pretty slowly. 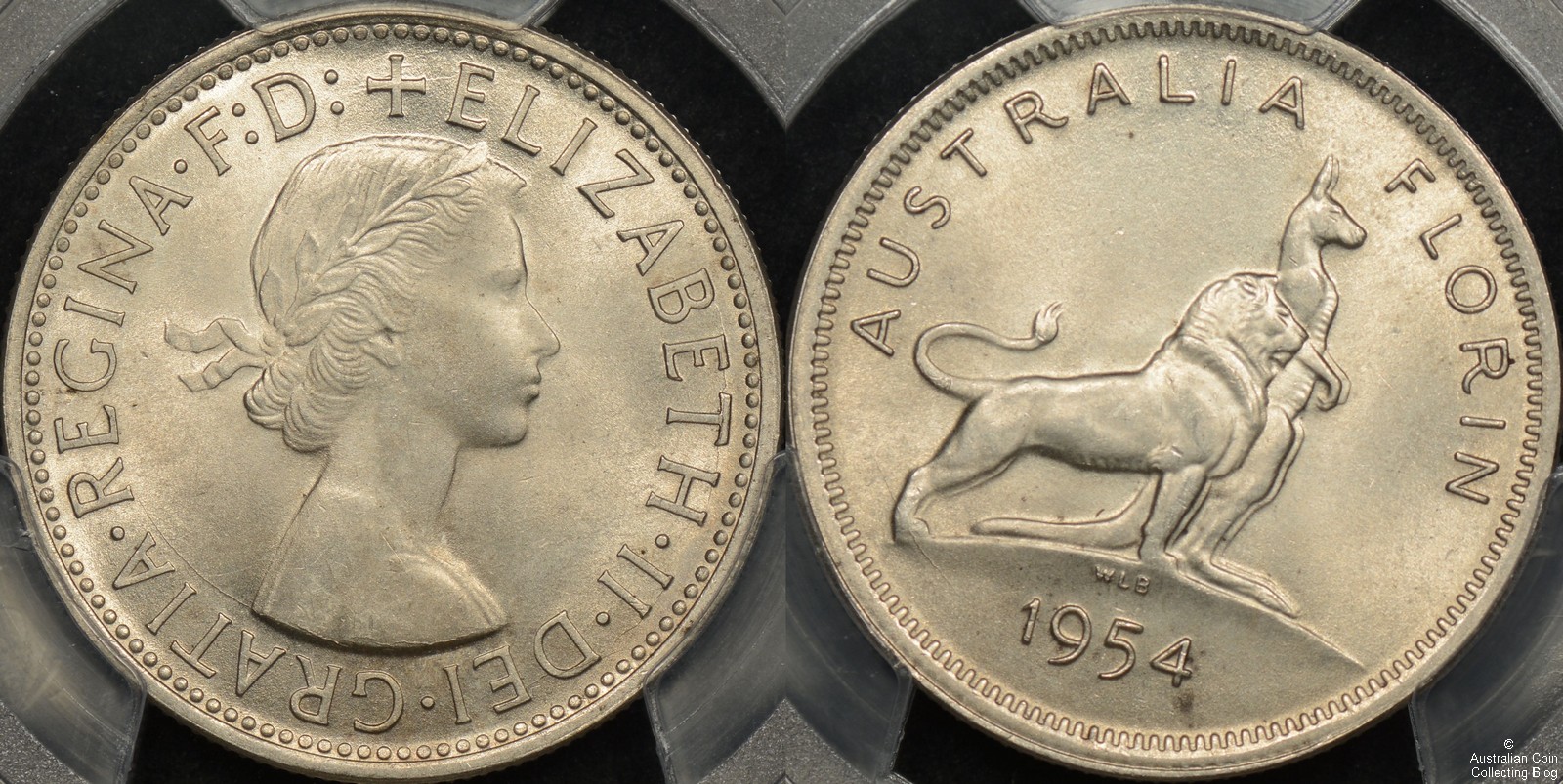 If you can find a florin that grades MS65 or MS66 at PCGS then you’re looking at a coin worth some serious money. The PCGS MS65 coin shown below is worth $500 or so, while a coin graded PCGS MS66 (of which there were 4 in December 2015) would be worth $2000 or more. Finding Royal Visit florins in these grades is tough as the coins often have planchet flaws, a flat reverse design that is prone to bagmarks, and the lustre is often satiny and subdued, all characteristics that can limit the grade at PCGS.

The 2015 edition of Pocket Guide to Australian Coin and Banknotes values the 1954 Royal Visit Florin at $2 in VG, $3 in Fine, $5 in VF, $10 in EF, an $15 in AU. Uncirculated is $40, $80 for Choice UNC, and finally $140 in Gem. These are actually pretty spot on for raw coins in our opinion, apart from of course the lower grades that are less than bullion value. The 2015 26th Edition of Renniks Australian Coin and Banknote Values values the coin similarly, with lower grades valued a dollar or three more and CHUNC at $110 and Gem at $225. We don’t ever see any collector paying $225 for a raw Royal Visit Florin so that’s a little optimistic. As always these values are BUY prices, and if you’re selling a coin to a dealer you’re always going to get less, and how much less probably depends on what catalogue the dealer favours and what sort of day they are having.

Values contained in this article were current at time of writing (December 2015) and are provided as estimates only. The exact value of any coin is only known when you actually sell it. Values are also very much dependent on whether coins are graded by a reputable third party grading company (PCGS or NGC) or if they are raw or graded by a third party company that holds no sway in the market place. Right now neither Australian coin catalogue handles the values of third party graded coins particularly well.