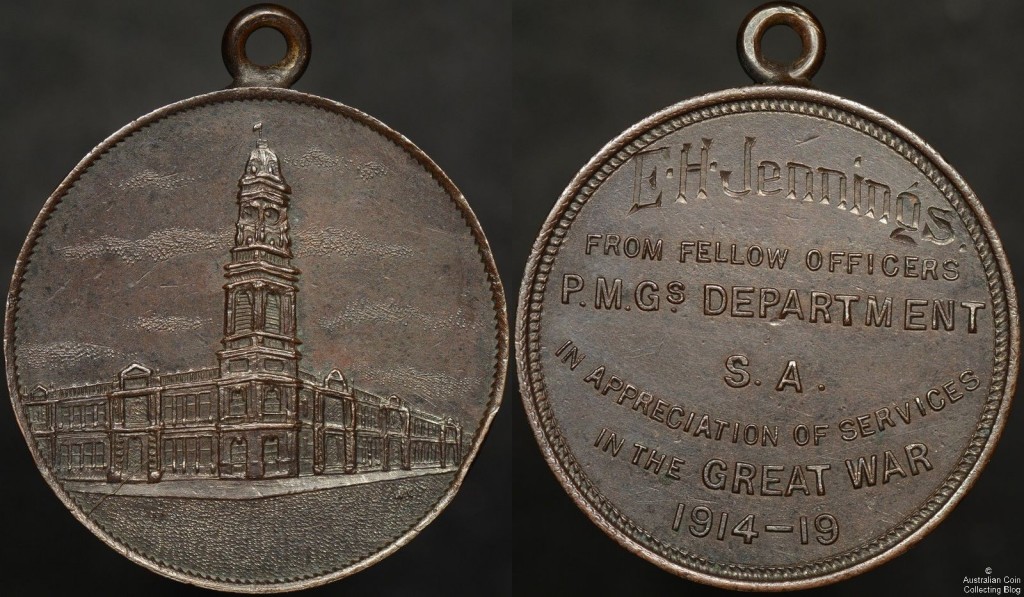 Medal with suspension awarded by the Post Master General’s Department (South Australia) to employees who served in World War 1. Medal is bronze with a loop, measures 31mm in diameter and weighs 10.1 grams.

Obverse: Depiction of the Adelaide GPO which is found on the corner of King William Street and Franklin Street in Adelaide.
Reverse: Inscription that reads “FROM FELLOW OFFICERS P.M.G.s DEPARTMENT S.A. IN APPRECIATION OF SERVICES IN THE GREAT WAR 1914-1919”. Above the inscription the medal is engraved “E.H. Jennings”. 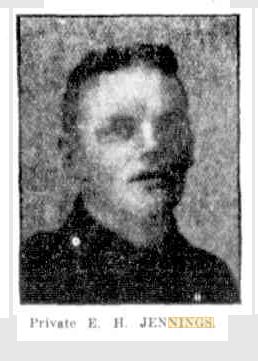 Ernest Howard Jennings (service number 2136) was 27 years old when he enlisted in the AIF on March 29th, 1916, the third brother from the same family to enlist. His military records lists his profession as Postman. He spent the best part of 7 months training with the 3/5 Pioneer training company before he was sent to France in November 1916 where he was taken on the strength of the 5th Pioneer Battalion. He remained on the roll of the 5th Pioneers for the next 11 months continuously except for two short stays in hospital while he was sick. On 12 October 1917 he is listed as wounded in action in France, the extent and nature of the wounds is not certain but a newspaper article suggests it was due to trench foot and shell shock. He is listed as wounded again on 10 November 1917, a gun shot wound to the buttock and he was evacuated to the 3rd Canadian Casualty Clearing Station in Belgium, were sadly, Ernest Howard Jennings died of his wounds. The date of his injury and the location of the casualty station, the place where he received his wounds (in or around Anzac Ridge near Ypres) suggests that Ernest died in the offensive at Ypres in Belgium.

You can view the service record of E.H. Jennings here. You can also read a little about his life and his wife in this article from the Murray Pioneer and Australian River Record (30 November 1917).

I took the time to travel to the GPO in Adelaide on the off chance that their World War 1 Roll of Honour was visible in the public areas of the building. Indeed it was, and you can see the handsome carved marble roll below with Ernest Jennings’ name 3 names up from the bottom left. A helpful staff member said there was another roll in a nearby hallway. In a dim tiled hall with stone walls there was a very large wooden roll several meters wide and 2 meters high, painted in gold with about 280 names of men from S.A. Post, Telegraph and Telephone Department “who have joined the Australian Expeditionary Forces 1914-1918”. The board was erected in November 1915 and presumably kept up to date during the war period and at the conclusion of the conflict. Jennings name is found in column 4, 7 names up from the bottom. Top of Wooden Roll of Honour in GPO You can read more about the wooden roll of honour in the GPO here. It’s made of Queensland maple and originally only had space for 250 names, I wonder if they had to extend it? The cost is listed as £30. The average weekly wage in South Australia in 1915 was 54 shillings, which is a jot under 3 pounds. So the cost of the roll was 10 weeks wages. Costly indeed.