It’s been fascinating researching into the history of this medal created by the biggest Adelaide tanner, leather, and bark merchant from around the turn of the 20th century. John Reid, an enterprising Scotsman founded the business in 1873 after being a partner in Reid Brothers tanners, Hindmarsh, he died in 1888. His son J. M. Reid (born 20/11/1858) was well known in the Adelaide business community, being held in great esteem within the city in the early 1900’s. J M Reid was the president of the Chamber of Manufactures (1906) and later the president of the Tanners association (1918). As published in Adelaide’s “The Register” Tuesday 21 August 1906:

THE VICTORIA TANNERY,
A FLOURISHING INDUSTRY.

Possibly few of the manufactories of South Australia equal in importance the extensive tanning works of John Reid and Sons, Limited, associated as they are with four large bark grinding plants at Hindmarsh, Mount Torrens, Echunga, and Second Valley. The Hindmarsh establishment was selected for this week’s viceregal visit, and on Monday a large party, including His Excellency Sir George Le Hunte, the Premier, the Captains of the Challenger and the Psyche, members of the committee of the Chamber of Manufactures, legislators, and others, spent a most profitable couple of hours following out the various processes.

The tanning industry is of great importance to Australia, as every pastoralist,stock owner, or trapper, every butcher and dealer in live stock, benefits either directly or indirectly. And not only the Commonwealth, reaps the benefit, but the industry has a far-reaching and almost world-wide influence, as in the present instance, business is done with all parts of the Commonwealth.

The Hindmarsh tannery site, situated approximately where the Adelaide Entertainment Centre now resides is where the idea for the above medal was born. The Adelaide Advertiser newspaper dated Monday 23rd March 1908 sums up the story behind the striking of the special medal in leather and a picnic held about 20 kilometers south-east of the city.

That there exists a good feeling between Messrs John Reid & Sons and their employees, who total about 200, was apparent on Saturday, when the employees, at the Victoria Tannery and Bark Mills, Hindmarsh, and those at the firm’s warehouse, Adelaide, combined in holding a picnic at Long Gully. Mr. J.M Reid, head of the firm, with his wife and two daughters, will leave on Friday for Europe and America on an extended tour, and it was in a great measure to do Mr. Reid honor that the picnic was held. When it became known that Mr. Reid intended visiting Europe and America, a strong committee of the employees was formed, and they soon decided on what appeared the best way to show their appreciation of him in a tangible way, and at the same time do something for the enjoyment of all their fellow workmen, their wives, and children.

A medal of sole leather was struck for the occasion, and on the breast of each committeeman and official one was fastened neatly with a piece of pink ribbon. It bore the inscription -“Presented by John Reid and Sons, tanners, leather and bark merchants, Adelaide, South Australia,” and on the obverse was a stamped impression of the Victoria Tannery.

Over 350 men, women and children were conveyed to the hills and back in fourteen five-horse drags. At half-past 8 o’clock a move was made from Adelaide, headed by the City Volunteer Brass Band in a special drag, to join a contingent of four other drags, in which were about 50 guests, consisting of leading business people and their wives.On arriving at the destination a good programme of sports was entered upon. The chief event was the Victoria Tannery Handicap and in the final A. A. Miller, who started 11 yards behind his nearest competitor, breasted the tape first. Amongst the visitors were the Mayor of Adelaide (Mr. F. Johnson) and the Mayor and Mayoress of Hindmarsh (Mr. and Mrs. W. H. Dring).

This medal, struck on sole leather in two pieces and glued together, was produced at the Reid Tannery has been touted as an advertising piece but after more than 100 years it’s clear from the newspaper article it was originally intended as an employee keepsake. Later, an archived lot in Noble Numismatics auction (Sale 66, lot 4003 March 2001) describes a medal as “JOHN REID & SONS LD. TANNERS, LEATHER & BARK MERCHANTS ADELAIDE S.A. Est. 1873 Inscribed on edge Won by Mr George Page. At Myponga show 17th April 1918 Silver 50mm” which confirms the existence of the same design struck as a prize medal as catalogued and (similar) pictured in Carlisle 1873/5. Here it is listed as being struck by Stokes & Martin who, according the Carlisle, traveled to various exhibitions and shows striking medals on site. A similarly comprehensively researched article by Peter Lane and published in the Numismatic Association of Australia Journal Volume 23 suggests the medal was struck by the leading South Australian medal maker of that time, S. Schlank & Co Ltd who likely struck the leather version. 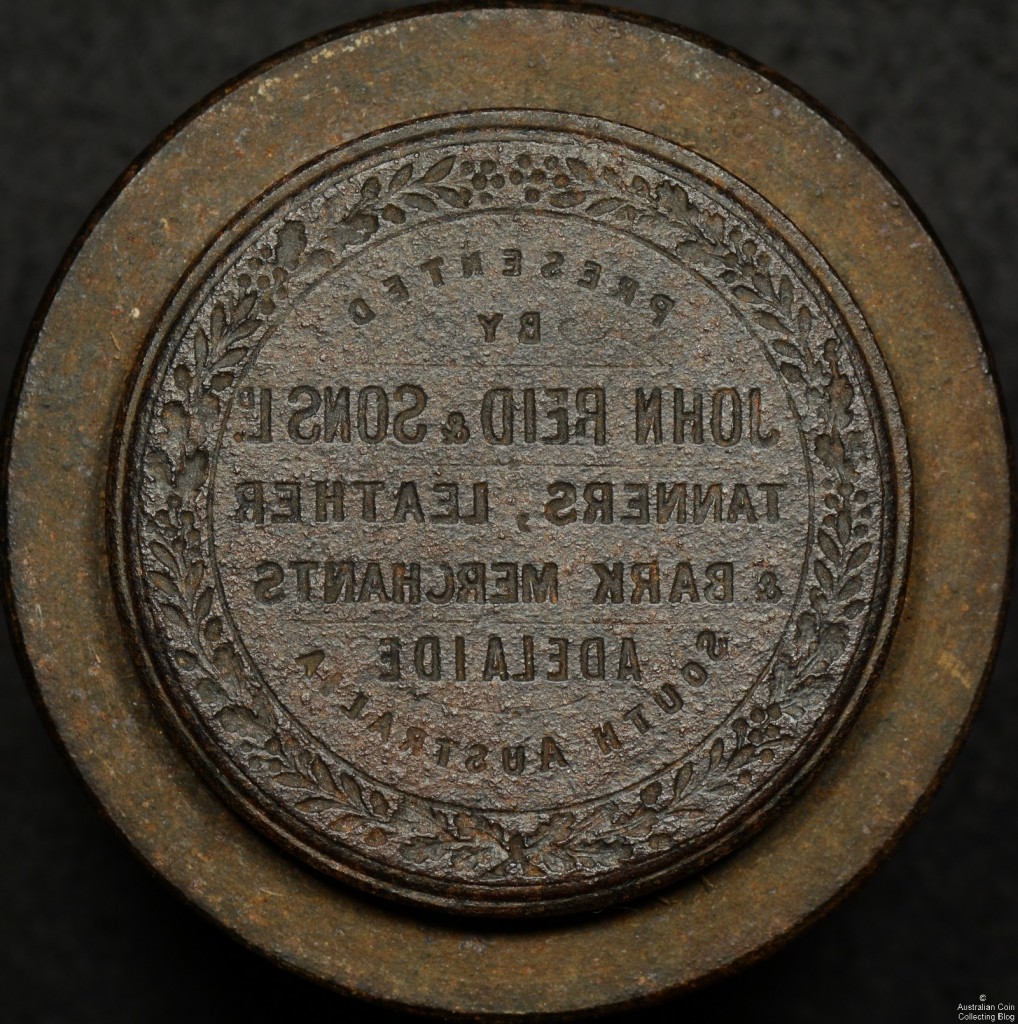 Since writing this article we’ve found some examples of both medals and these are presented in this article with thanks to their owner. The silver medal seen below was presented to A D Kerber in 1912, weighs 55.67 grams and is 50 mm.