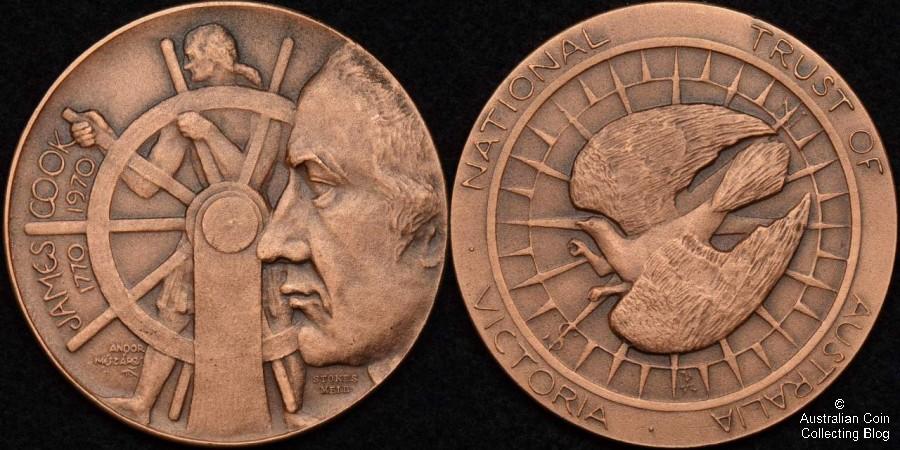 The National Trust 1970 Captain Cook Medallion commemorates the bicentenary of Captain Cook’s journey navigating the east coast of Australia in 1770 and pays tribute to Cook’s great navigation ability. It was produced for the National Trust of Australia (Victoria) and it was hoped to be the first in a series of medallions commemorating notable Australasian historic occasions. We don’t believe however, that there were any subsequent issues.

It was originally issued in sterling silver for $30 and copper for $5-6 each. The design is by well known Australian designer Andor Meszaros and could well be his last design before his sudden passing in May 1972. The medallion was struck by Stokes (Australasia) Ltd.

The obverse  reads “James Cook 1770 1970” along with “ANDOR Meszaros” and “Stokes Melb”. The profile of Cook is based on a plaque by famous potter Josiah Wedgwood and is symbolic of his leadership. Stokes has given his features a ruggedness as Cook orders the helmsman in the background. The ship’s wheel is the second focal point of the design. The reverse is an exact replica of a compass card and a navigation instrument of the Cook period, superimposed on the top is the National Trust’s emblem, a heraldic protective bird. Andor also designed the Trust’s emblem some years prior. The reverse legend reads “NATIONAL TRUST OF AUSTRALIA VICTORIA”.

At 52 millimeters or 2 inches in diameter 3,000 pieces were struck in copper and 300 in silver with Carlisle reference c1970/32. This example struck in copper housed in black textured box with blue velour lining. Inside the lid is printed “STOKES (A’ASIA) LTD. Melbourne, Australia Estb. 1856″