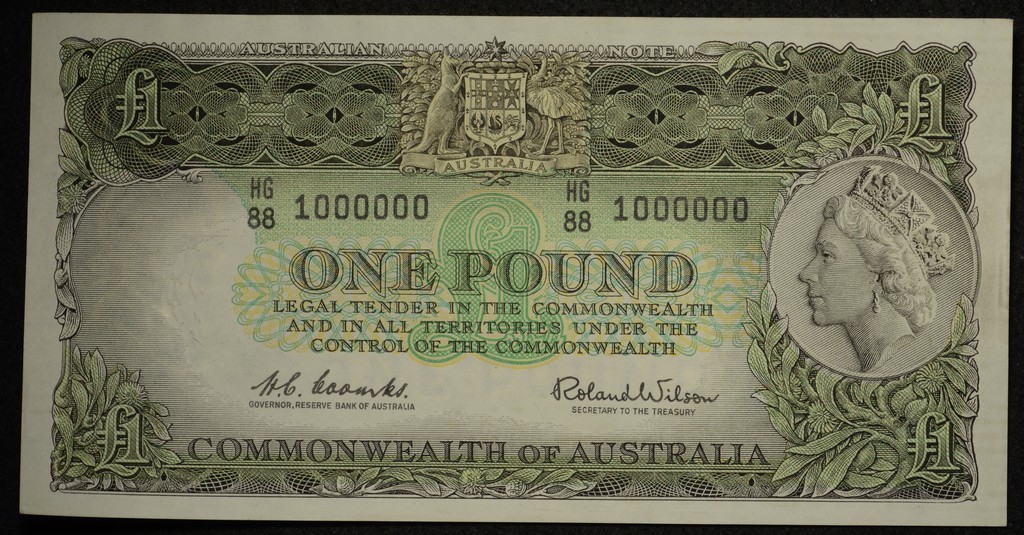 Between 1913 and 1971 each Australian banknote prefix had a maximum of one million notes printed. These started at XX 000001 and in a complete serial run ended at the millionth note XX 1000000. Not all serial numbers however had a million notes printed. Starnotes replaced any soiled or damaged notes in the bundles to keep everything in sequential order making it easier to count but it was the last note, that millionth note that was special. There was only one millionth note per prefix and then only if that full run was printed.

That note was specially prepared and had an extra digit! The numbering machines printed 6 digits onto each note and this was an automated process. To prepare the millionth and last banknote for the run they had to hand prepare it. Note printing staff made a sheet of notes which included the serial XX 100000. That note was cut and the seventh digit hand printed onto the note in a careful process. This involved aligning the note with a piece of blank pink paper over the serial numbers and the numbers printed on that pink paper. On the pink paper a tiny piece was cut out in the position of the seventh digit. It was realigned shifted to the right and the inking rollers marked that final 0 giving that note its seventh digit. This alignment was purely visual and as such many million numbered notes have their last digit a little wonky. Judy Shaw, a leading banknote expert wrote that she met a Note Printing staffer who operated the machines and they needed much care and skill and they “were never attempted after a counter lunch”.

Even rarer than a starnote few of these million number notes have survived. In 2005 Judy Shaw suggested just 61 notes Australian pre-decimal million number notes exist whilst Mick Vort-Ronald suggested the number is more like 43 (Feb 1999). These numbers come from their experience trading in and watching the banknote market over the years. The oldest known surviving million serial banknote is a 1927 Riddle Heathershaw One Pound from the reign of George V. These notes are keenly sought and even have their own section in the catalogues. They have a considerably high catalogue value but take these with a grain of salt as the banknote market has fallen flat in the past few years.