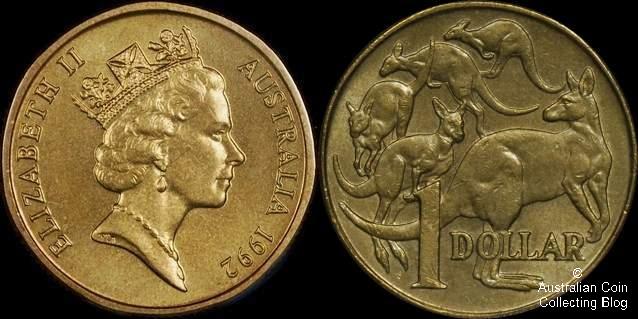 Circulation 1992 Mob of Roos One Dollar -we’ve made this one up, does it exist?

There’s a big question over whether this coin exists or not -the Stuart Devlin designed 5 kangaroos standard reverse design on the Australian one dollar coin dated 1992 and released into circulation. The Royal Australian Mint certainly think they minted some and released them into circulation but collectors who search bulk coins and browse their change think differently. No one has ever found one…not one.

The Royal Australian Mint website which lists Australian Dollar designs and mintages shows .008 million coins entering circulation, that’s 8,000 that have never been seen or found. Surely it’s a mistake or these would have showed up somewhere.

Well the odd one has. Back in February 2012 in Downies Australian Coin Auctions number 310 lot number 2493 was described as one dollar 1992 with mob of roos reverse struck on a partially prepared proof blank, as struck and extremely rare estimate $750 and sold for $1,000 ($1190 inc buyers premium). Collectors can recall a few others appearing for sale every now and then but these can be counted on one hand. This suggests they were struck as “mint sport” and not part of the elusive 8,000 circulation coins that have been misplaced!

Collectors have put their heads together and come up with a rather plausible explanation for the 8,000 coins that appear in the 1991-1992 Royal Australian Mint Annual Report. In 1992 one of the collector coin sets that was issued was the Australian One Dollar Five Coin Set. This set included restrikes of past dollars including mob of roos dollars dated 1984 and 1985 and the commemorative dollar for 1992 which was the Barcelona Olympic coin. Maybe an error in the RAM financial report declaring their production statistics was made and these coins have been misidentified in the report.

It may also be important to note that in 1988-1989 $36 million of $1 were repurchased back by the Royal Australian Mint from the Reserve Bank. Whether or not these were kept and reissued later or melted down is unclear. This may account for the 8,000 coins issued into circulation and explain that they are not dated 1992.

Just to add here the one dollar coin included in the 1992 Mint Set and 1992 Proof set was the commemorative coin celebrating the Barcelona Olympic Games and this design was not released into circulation. It could also be struck on the gallery press at the Mint in Canberra or at the Royal Easter Show which may account for why the odd one has been found in circulation as it’s been spent. It has the commemorative reverse and not the standard mob of roos design.

Confused yet? Well the reality is if you’re searching circulation coins for a 1992 Mob of Roos to add to your collection you’ll be looking for some time, as far actual real collector statistics go, they simply cannot be found.