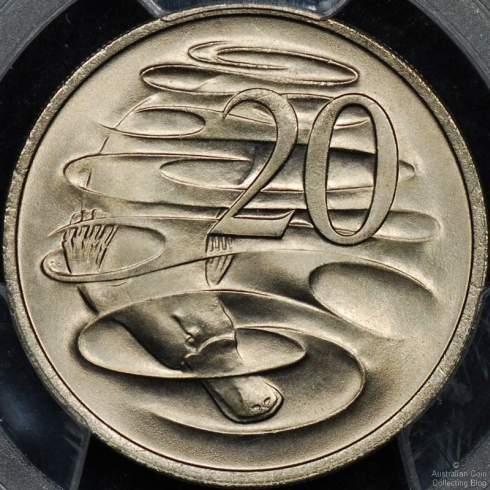 The Australian 20 cent coin has been minted since 1966 to the present day and is highly collected and loved. It has been released with many commemorative designs both for circulation and for the collector market. The swimming platypus reverse is the standard iconic design by Stuart Devlin.

The twenty cent is 28.52 millimetres in diameter and is struck on a round shaped copper-nickel planchet of 75% copper and 25% nickel. It has edge reeding or milling and weighs 11.31 grams, the same size and weight as a pre-decimal florin.

The standard reverse or tails side of the Australian 20 cent is the design of a swimming platypus by coin designer, sculptor and master silversmith Stuart Devlin. Of all the standard Australian circulating coin designs that Mr Devlin engraved this platypus is his favourite. There is a perception of depth in the design that he sought to capture with this coin winning the hearts of a nation. It is one of the most highly collected denominations.

Stuart Devlin now lives in England but in 1963 resided in Melbourne where he entered a competition to design the new decimal coins for the changeover to decimal currency in 1966. The decimal 20 cent would replace the silver one florin in the old money. The twenty cent platypus design carries Mr Devlins SD initials next to the to the claw at approximately 9pm.

The platypus design was not issued for circulation every year so some dates must be obtained from Mint Sets. Almost all the coins have been minted at the Royal Australian Mint in Canberra although in 1966 some coins were struck in London and in 1981 Wales and Canada. The Canadian coins having a distinctive missing claw (or 3.5 claws) mintmark/variety. One particular die that struck coins in London in 1966 had a wave on the top of the baseline of the 2 and is called the Wavy 2 or Wavy 20 variety, these coins can be found in your change and can be worth hundreds of dollars.

Many commemorative 20 cent coins have been struck for both circulation and collectors. It’s always a surprise to get something different in your change and discover what event or milestone Australia celebrates. We began to issue commemorative 20 cent coins in 1995 with the 50th anniversary of the United Nations and then theSir Donald Bradman tribute coin in 2001. Following this a barrage of commemorative coins entered circulation and many more were minted for collectors called NCLT that were released in special packaging but were not intended to circulate. The list of commemorative coins you could find in your change (at this time) is almost 20 different coins!

Every coin features the denomination on the reverse and the obverse has seen three different portraits of Queen Elizabeth II. From 1966 to 1984 the twenty cent was minted with the Arnold Machin portrait of the young Queen. From 1985-1998 it was struck with the Raphael Maklouf portrait and today (from 1999 to the present) we see the mature depiction of QEII by Ian Rank-Broadley.

Slight variations in the obverse design can be found with the Mint trialing newer technology resulting in 2004 a large head and small head Queen obverse and differences in the font of the IRB initials of designer Ian Rank-Broadley. In 2013 the Mint struck the platypus 20 cent piece in their 6 coin uncirculated set in hyper-metallic colour!

The Australian 20 cent platypus in colour!

Error 20 cent coins can show up from time to time and can be very spectacular. Of particular rarity are the platypus 20 cent being struck on a Hong Kong $2 scallop shaped planchet of which only a handful are known and also the platypus design struck on a bi-metal planchet is sure to stick out and be noticed as something unusual! These are however coins made in error where wrong planchets have been mixed up in the barrels of blanks and can fetch thousands of dollars on the collector market. Other known 20 cent error coins are more commonly found but still keenly sought the partial collar error, clipped planchet error, split planchet error andlamination flaws.

To date over 1.8 billion uncirculated 20 cent coins have been minted to be carried around in Australian pockets! Check out the mintages in our handy online tool Australian Coin Mintages. This tool is a work in progress so please excuse it’s incompleteness.