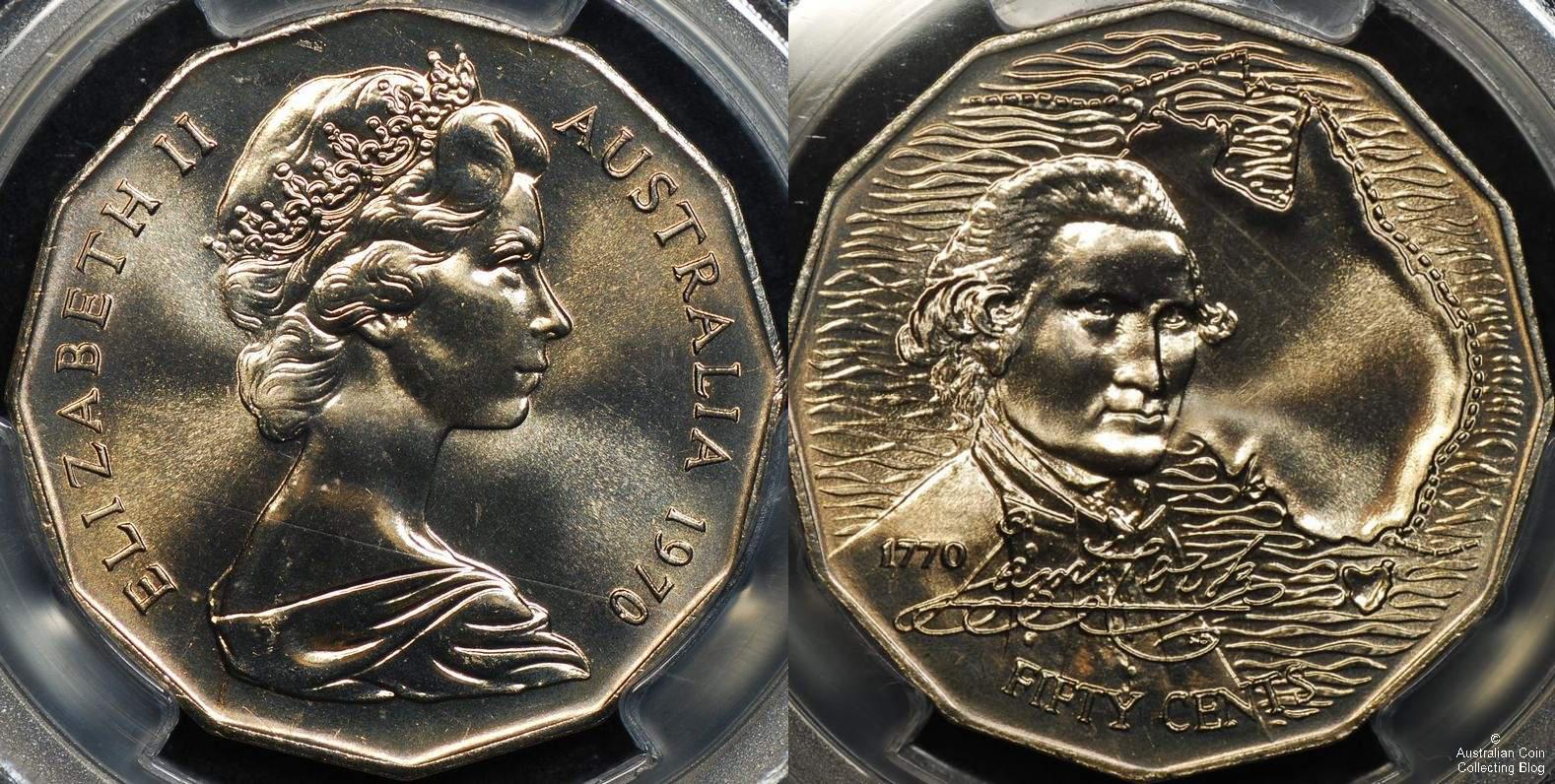 The Royal Australian Mint issued the first commemorative coin of of the decimal era in 1970 to celebrate the bicentenary of the navigation of Australia’s east coast by Captain James Cook. Cook is sometimes credited with the discovery of Australia but in reality the existence of Australia had been well known to Europeans for several hundred years. In command of his first voyage which left England in 1768 Cook visited Tahiti and New Zealand. He set off from New Zealand intending to sail north of Van Diemen’s Land (now known as Tasmania) and straight for Cape Town at the southern extreme of Africa. Instead he hit the coastline of Australia on the north of the State of Victoria in April 1770. Charting the coast northward he reached the northern extremity of Australia at Cape York in August before finally setting course for Cape Town in South Africa which he reached in 1771.

The obverse of this coin bears the Arnold Machin portrait of a young Queen Elizabeth II. This portrait was used from 1966 through to 1984. The reverse features Cook, a map of Australia and a dotted line depicting the voyage up the east coast. It was sculpted by Stuart Devlin, who at the time had designed the reverses of all Australian decimal coins. The Captain Cook 50c is the 12 sided dodecagonal shape with a plain edge. Made from cupro-nickel (75% copper and 25% nickel) it weighs 15.55 grams at 31.51mm in diameter. 16 million of the coins were released into circulation and 550,000 were struck to specimen standards and sold in red plastic cases through banks and the RAM. About 15,500 coins were struck to proof standard for the 1970 proof sets and another 40,000 brilliant uncirculated coins were issued in the 1970 mint set. 70 special presentation sets containing two proof coins were also produced.

Because of the relatively large mintage of the 1970 Captain Cook 50c, because the public hoarded the coins in great numbers and because half a million of the coins were issued in specimen standard it’s not that hard to find these coins in uncirculated condition. They are, therefore, not particularly valuable. Specimen coins in their original red plastic cases can be found for just $10, while regular uncirculated coins might be bought for just $5 or so. Proof coins are worth quite a bit more ($50) but you’d need to be very lucky to find one of these without breaking up a proof set. A circulated coin pulled out of your change is worth….50c!