Home › Collecting Coins › R A Mint You Have Lost a Collector

R A Mint You Have Lost a Collector

Many years ago I began a collection of Australian 1 dollar coins. The iconic 5 kangaroo design dollar coin by Stuart Devlin caught my eye and those aluminium bronze coins gradually amassed in one place, they looked stunning in 2×2’s in coin album pages safely tucked away in a coin album.

8 albums later I have made decisions about my collection and what it should contain. Only the uncirculated coins (not proof or silver) and only those 25 millimetre just like the coins for circulation. I also needed to collect each type of packaging for example an unc coin in card and the PNC to have both genuine product issues. I decided this as more and more non circulating collector dollar coins were produced by the Mint. Adhering to the 25mm rule meant a lot of tacky oversize dollar issues were immediately ruled out which was great for the budget.

Sadly I think I’ve come to a decision that the collection must end here. The straw that broke the camel’s back -the release of 26 individual coloured alphabet $1’s at $15 each (or buy all for $351.10). I can’t justify such a spend on the collection when I will likely be able to buy them in a year or so’s time on the secondary market for half that cost. 26 coins each in it’s own packaging will take up a whole other album on it’s own and you’d expect an equivalent number of coins to be minted throughout the year in 2015. 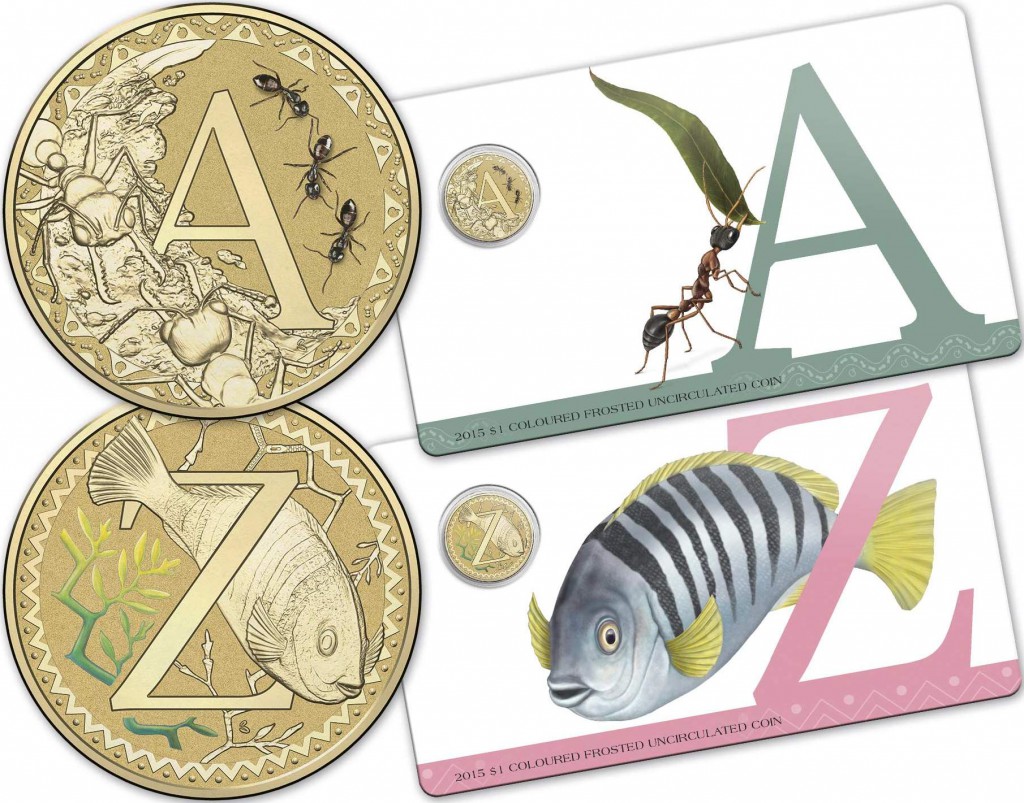 To adhere to my own current collecting rules I will also have to buy 26 Baby Proof Sets and order each of them with a letter of the alphabet A through Z. You see in 2015 the Baby proof sets include your chosen letter aluminium bronze coloured frosted UNCIRCULATED dollar coin (yes, the proof set with an unc coin) so to keep the collection complete I would have to buy 26 2015 Baby Proof Sets at $125 each, a whopping total of $3,250.

Other collectors have an even more difficult task, if you include silver dollars then you’ll find you have to add 26 individual boxed coins with the same alphabet designs in frosted uncirculated finish finish at $50 each or pocket a 10% discount and buy all at once for $1170. Let’s not even mention the collectors who like to buy multiples of each release.

Lets’get back to the core collection and consider a few dollar coin issues from 2014. The mobile coin press has been well used by the Royal Australian Mint this year with three separate designs being counterstamped at various locations around Australia. A mob of Roos dollar with an S counterstamp, A Voyage to Terra Australis dollar with all manner of mintmark, counterstamps and privymarks and the circulation ANZAC dollar with location counterstamps. Some of these issues could be obtained through your friendly coin dealer with the Mint offering a dealer allocation and others made available only to those who turned up to the event. But the Mint didn’t make this clear each time which events had dealer allocations and which you needed a good friend in the chosen city to go along and stand in a queue for you. It was even stated earlier you had to attend the event and later advised there would be a dealer allocation. Too bad if you had already bought an expensive plane ticket!

This alphabet dollar circus and difficult to obtain issues have made me take a real hard look at my collection and evaluate where my coin collecting is heading and I’m afraid I won’t be chasing any more dollars.