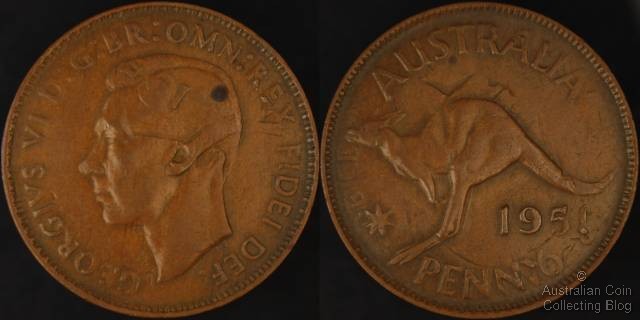 We’ve talked about double struck coin errors and rotated double struck coin errors but the most uncommon of double strike errors is the ‘flip over double strike’. This error might occur when a previously struck coin returns to the coining chamber (perhaps it got back into the hopper of blanks) or the coin fails to exit correctly and flips over and lands back in the press upside down to it’s first strike. The coin is then re-struck with the previous obverse struck by the reverse dies and the reverse by the obverse dies. Both strikes are within the collar die.

Above you can see an Australian 1951 Penny (with an unfortunate carbon spot) that is a flip over double strike error. The ‘obverse’ of the coin shows the portrait of George V, however, if you look closely you can see the numerals of a date in the top of his hair, a roo’s tail leading backwards from his ear, and the forelegs of a roo in the hair behind his ear. You can see these forelegs in the detail image below. 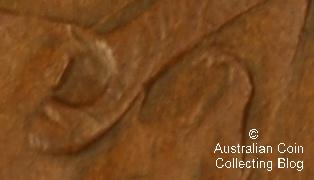 The reverse of the coin is a little more spectacular with the King’s nose and mouth from the first strike clearly visible above back of the kangaroo. The ghosted image of the top of the King’s head runs from the bottom of the kangaroo’s back leg in a curved arc around and through the date ending up in the tail. Where it meets the tail you can see the forehead of the King. Below is a detail image of the top of the roo’s back showing the King’s nose and mouth.

Detail image of reverse showing Kings face above roo’s back