As published in the Australasian Coin and Banknote Magazine June 2015 by the Australian Coin Collecting Blog. Subscribe here.

Hub Doubling – What is it?
“Hubbing” is the process in coin manufacturing where hardened positive image working hubs are pressed into blank steel dies to form negative image production dies. Often it takes more than one hubbing process to fully form the coin image on a production die. However, as the production dies are hubbed they work harden and must be heat treated (or annealed) to soften them to allow the hubbing to be carried out again. Obviously when a production die is hubbed a second (or even a third) time the production engineers in charge of the process must ensure that the working hub and the production die are perfectly aligned. If they are not, then the result is a doubled die, or very occasionally, a tripled die. All coins struck with such a die will show the doubling or tripling.

Hub Doubling in Australian Coinage
There are a number of hub-doubled Australian coins known. The best known is the so-called “double-nose” penny (which is probably a triple die) of 1962 struck in Perth. You can see the obverse of one of these well-known coins in Figure 1. Others include the 1926 half penny, 1953A half penny, 1954A half penny, 1956Y penny and the 1977 2 cent. 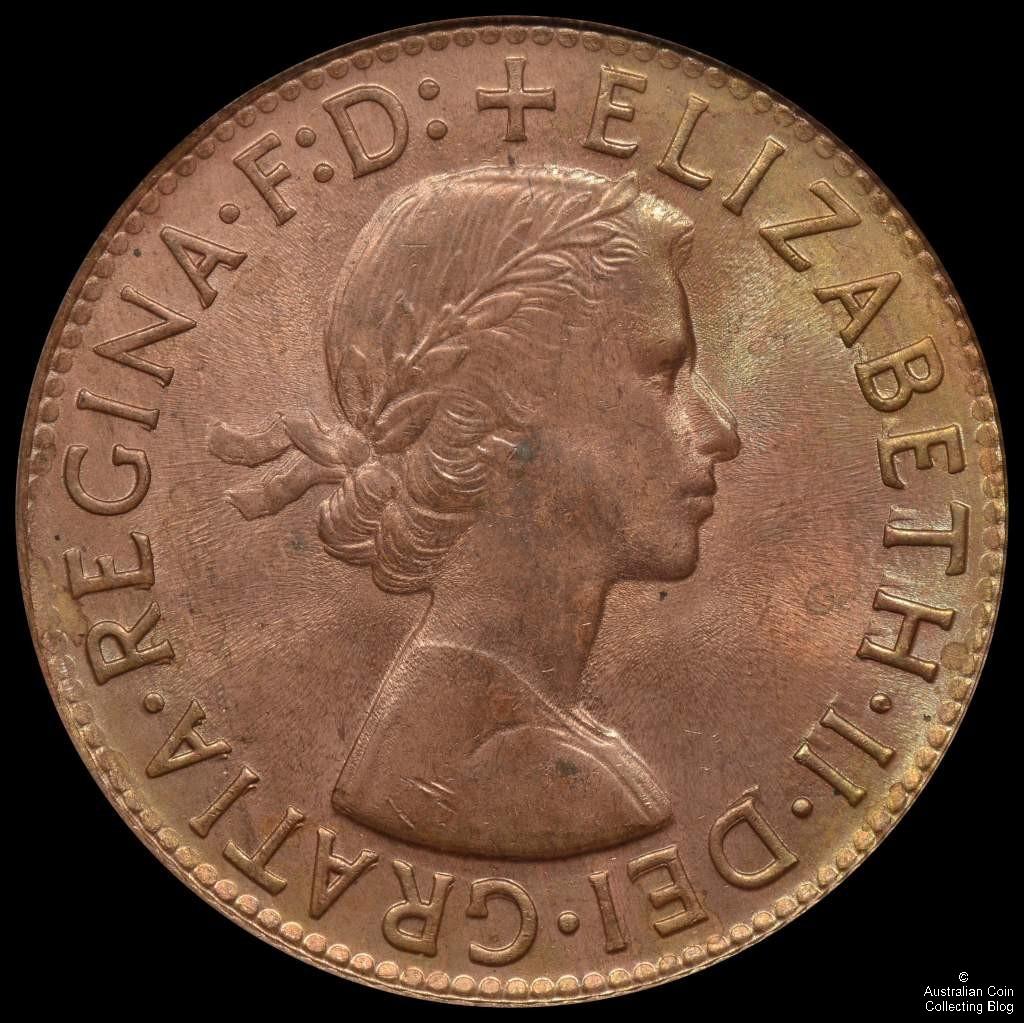 An Interesting 1943M Threepence
In late 2014 we saw a picture of the obverse of a 1943M threepence while browsing a coin related internet forum. The obverse legends appeared to exhibit strong doubling but we couldn’t be entirely sure as the image wasn’t of the best quality. Regardless, it was interesting enough to warrant further investigation. We headed off to the world’s biggest numismatic garage sale (eBay) and spent a few hours looking at every Melbourne minted 1943 threepence we could find. We finally found a single coin nestled in a group of three other treys that seemed to have a doubled obverse. The cost was only a few dollars so in the interests of numismatic research we ‘pulled the trigger’ and a few days later the coin you see in Figure 2 arrived.
It can be seen that there clearly is doubling of the obverse legends. The key question to ask next, is the doubling just strike (or machine) doubling, or is it hub-doubling? 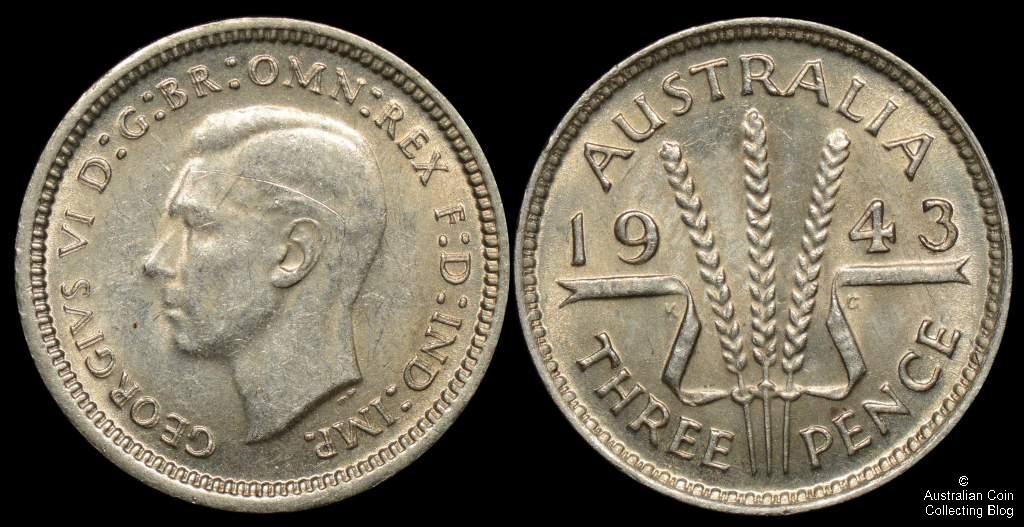 Hub Doubled or Strike Doubled?
Hub doubling and strike doubling are quite different things. Strike doubling / machine doubling / mechanical doubling occurs when the die skips and skids across the coin as it is struck. This can be because of poor tolerances in the coin press or because the dies or supporting structure has worked loose during the minting process. Strike doubling is typified by a flat shelf like appearance of the doubling, and the lack of separation of design elements between the two ‘strikes’. This is contrasted with true hub-doubling where doubled elements are formed almost fully and there’s a clear split or notching between the doubled design. This separation is typified by split serifs in lettering, distinct separation of thin parts of the coin design, and notching at the corners devices and legends.
So is our 1943M threepence a true hub-doubled coin? Figures 3a and 3b tell us the story of what is going on. In both images we have taken a microscope image of a portion of the obverse legends and compared it with the same area from a normal 1943M threepence. Figure 3a shows the IVS of GEORGIVS with areas of interest highlighted with red arrows. Note the clear splitting of serifs on all three letters and the clear separation on the right part of the V. Figure 3b shows similar characteristics on the IM of IMP. The serifs of both letters are clearly split, and the left upright of the M is obviously separated. 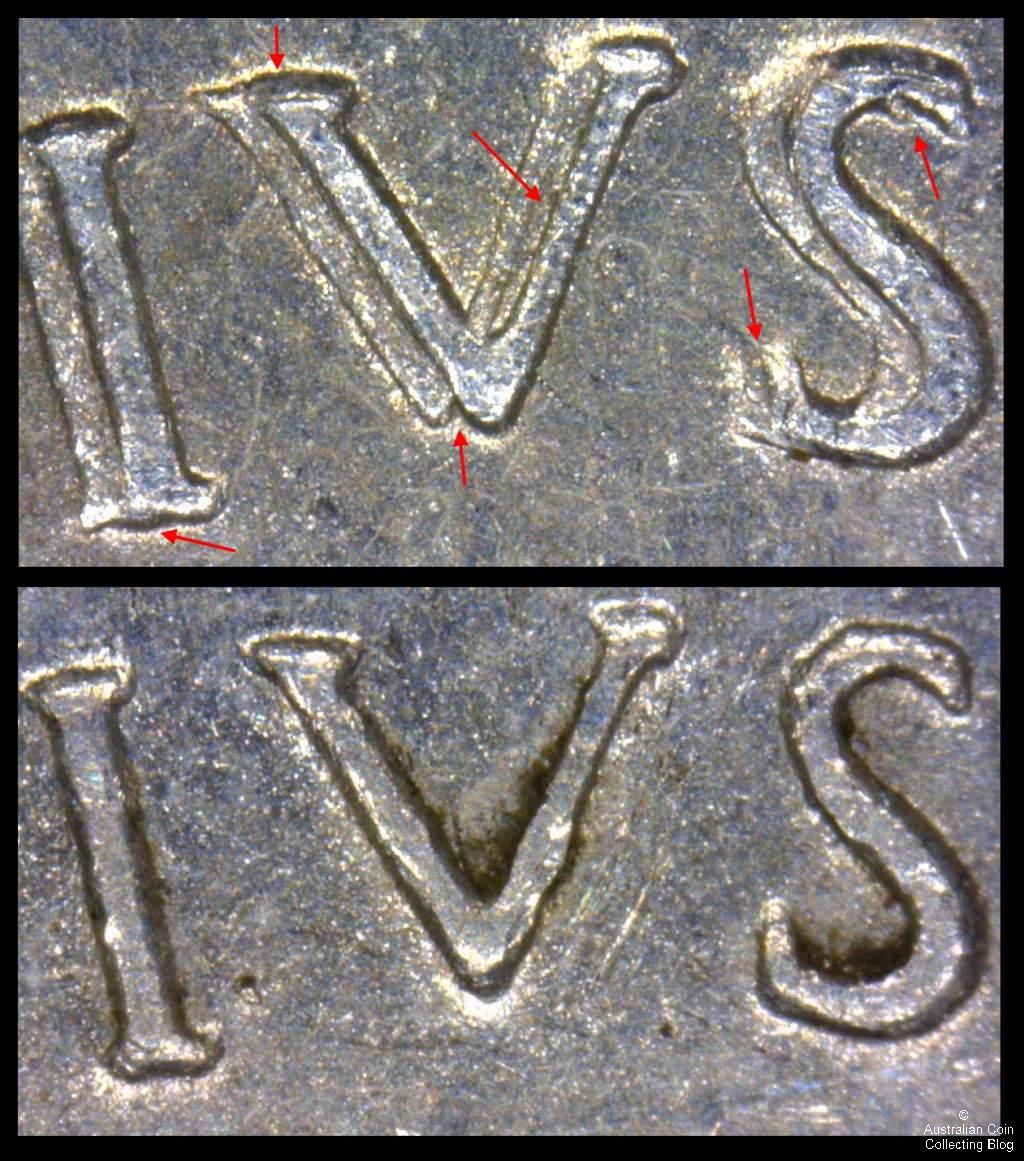 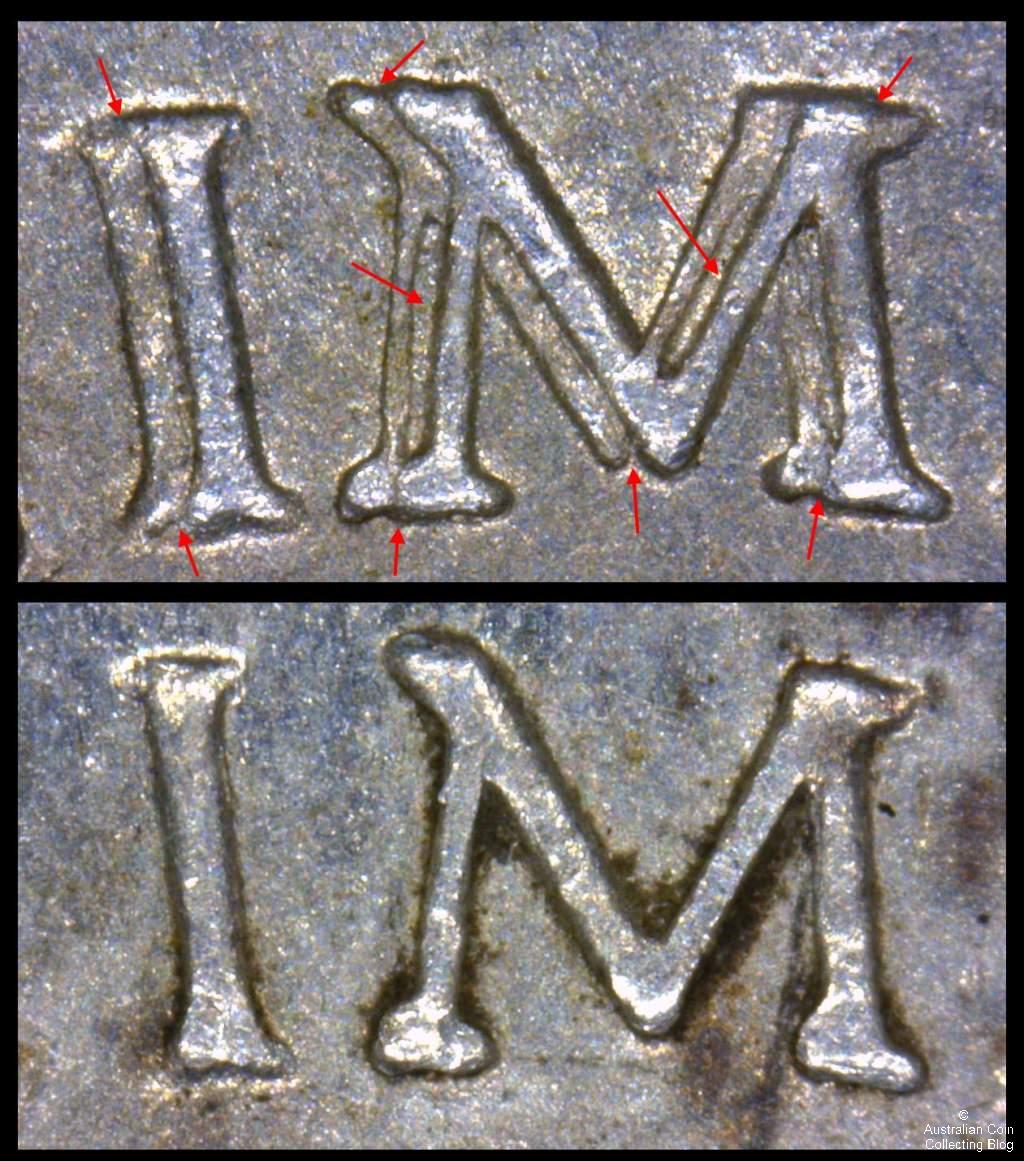 A Possible New Discovery?
Here we have what is clearly a hub doubled coin. We’ve conducted a search of the literature available to us and have not found record of a hub doubled 1943M threepence. So, it is also possible that what we have is a new variety for those of the “thinking arm” to keep an eye open for!
References
McConnelly, Ian (2010) Renniks Australian Pre-Decimal Coin Varieties, 2nd Edition Banksmeadow: Renniks Publications
McConnelly, Ian (2005) Renniks Australian Pre-Decimal Coin Varieties, 1st Edition Banksmeadow: Renniks Publications
Holland, Paul M. (2006) Australian Pre-decimal Bronze Coinage, The Journal of the Numismatic Association of Australia, Vol 17 pp16-20
Herbert, Alan (2002) Official Price Guide to Mint Errors, 6th Edition New York: Crown Publishing Group